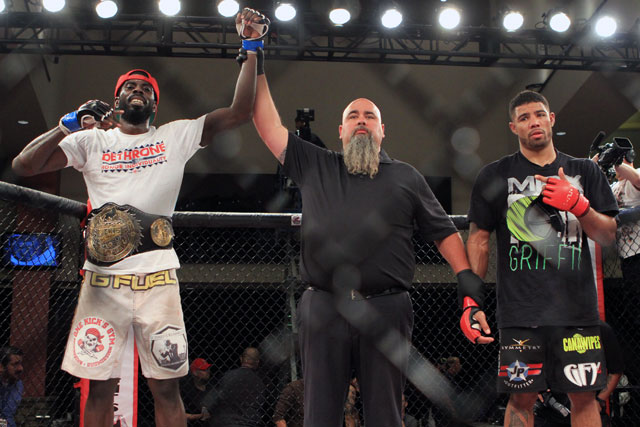 
Max Griffin’s reign atop the Tachi Palace Fights welterweight division did not last long: six months and a day, to be exact.

Chidi Njokuani weathered protracted exchanges in the clinch, survived takedowns and let fly with a series of body kicks, as he banked a split decision over Griffin to become welterweight champion at TPF 23 on Thursday at the Tachi Palace Hotel and Casino in Lemoore, Calif. All three judges saw it 49-46, two of them siding with Njokuani (13-4).

Griffin (10-2) seemed content to operate in close quarters while shooting for an occasional takedown. Njokuani stayed patient, waited for better distance and did not waste opportunities when he got them. The 26-year-old younger brother of Ultimate Fighting Championship and World Extreme Cagefighting vet Anthony Njokuani, he cracked Griffin with more than one body kick that might have felled lesser men. Even though Griffin withstood those attacks, he did not find favor with two of the three judges.


In the bantamweight co-main event, a takedown- and clinch-heavy approach carried Rolando Velasco to his sixth victory in seven appearances, as he eked out a split decision against former King of the Cage champion Jared Papazian. 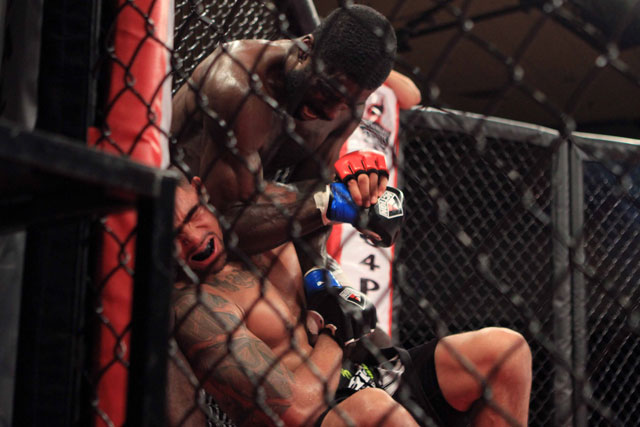 (+ Enlarge) | Photo: J. Sherwood/Sherdog.com
Njokuani use defense to punish Griffin.
Papazian (18-12) was superior on the feet -- he was particularly effective in the second round, where he had Velasco on the run with punches -- but failed to stay upright with any consistency. Velasco (11-3-1) remained true to his game plan across all 15 minutes, as he closed the distance on the UFC veteran and either pursued takedowns or sucked him to his black hole of a clinch. He stymied Papazian down the stretch with his persistence, as he advanced to his back with hooks set and bled the clock.

The 27-year-old Papazian has compiled a disappointing 4-3 record since he was cut by the UFC in 2012.

Meanwhile, Dethrone Base Camp representative John Reedy leaned on repeated takedowns and damaging ground-and-pound in capturing a unanimous decision from Ray Cervera in a featured lightweight affair. All three cageside judges scored it for Reedy (11-6): 30-25, 30-27 and 30-27.

Cervera (8-3) briefly floored “The Wild Child” with a right hand in the first around and later bid on an armbar, but he offered little else in terms of meaningful offense. Reedy did his best work in round two, where he executed a takedown and slashed away with vicious elbows from the top. One of those elbows sliced open Cervera, spilling blood all over the cage. The third round played to the beat of a similar drum, as Reedy again grounded “Baby Ray” and piled up points with punches and elbows; he even channeled his inner Kazushi Sakuraba with double hammerfists.

Elsewhere, Dominic Clark took care of Charles Diaz with a swarm of first-round strikes in their lightweight showcase. Perhaps best known for being on the receiving end Rumina Sato’s six-second flying armbar in 1999, Diaz (11-8) succumbed to the blows 59 seconds into round one.

Clark (8-4) did not give the Shooto alum space to breathe. He backed up Diaz with an initial punching burst, trapped him along the fence and went to work. A well-timed knee strike from the PKG export doubled over Diaz and drove him deeper into a defensive shell. Clark unleashed one last volley of right hands to the body and head, forcing referee Jason McCoy to call for a standing stoppage.

In other action, UFC veteran Justin Jones (4-2) choked Mike Morales (3-2) unconscious with a guillotine 3:00 into the first round of their catchweight encounter; Josh San Diego (5-0) knocked out Richard Parra III (1-1) with a crushing knee strike 4:58 into round one of their duel at 135 pounds; Jaimelene Nievera (2-1) submitted Kameron Perkins (0-1) with an armbar 3:55 into the third round of their 120-pound catchweight contest; Joe Barajas (11-1) picked up a unanimous decision over Aaron Arana (5-2) in their pairing at 135 pounds; Drake Boen (3-2) choked Samuel Alvarez (0-1) unconscious with a triangle 41 seconds into round one of their featherweight tilt; Pinnacle MMA’s Jamall Emmers (8-2) submitted Merwyn Rivera (5-2) with a rear-naked choke 34 seconds into the first round of their battle at 145 pounds; Thrive MMA rep Art Hernandez (2-0) tapped Victor Tubera (1-3) with a rear-naked choke 4:13 into round three of their lightweight scrap; and Abel Garcia (1-0) submitted Anthony Torres (0-2) with a straight armbar 4:10 into the first round of their clash at 125 pounds.