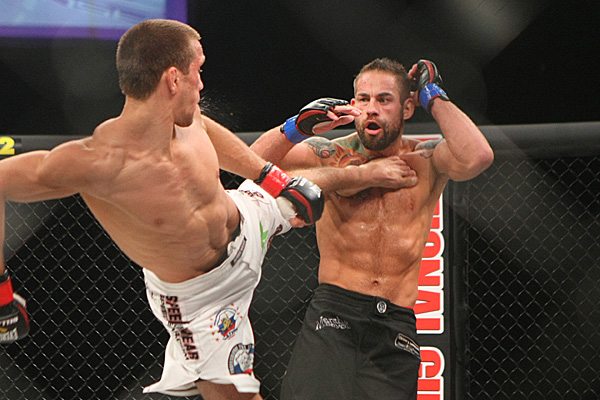 UFC veteran Rich Clementi spoiled the promotional debut of Alexander Sarnavskiy in the Bellator Fighting Championships Season 7 tournament quarterfinals, as he captured a split decision from the highly touted Russian prospect in the Bellator 77 main event on Friday at the Sovereign Center in Reading, Pa. “That dude was shooting cannons; a tough, tough dude,” Clementi said. “One thing about this ring; it does not lie.”

The 35-year-old Clementi nearly finished in the first round, where he pressed for takedown, maneuvered onto the standing Sarnavskiy’s back and fished for the rear-naked choke. After a lengthy struggle, the Louisianan slipped his arm underneath Sarnavskiy’s chin, flattened him out from behind as he fell to the ground, and tightened his grip. The end seemed near. However, the resilient Sarnavskiy withstood the choke for more than a minute and ultimately freed himself from Clementi’s clutches.

Round two played out in similar fashion, minus the near-submission. Clementi again transitioned to the Russian’s back, popped him with punches and tried to create opening for another choke attempt. Sarnavskiy defended well, but found himself in a two-round hole.

Perhaps sensing his situation had grown dire, Sarnavskiy asserted himself in the third round. There, he clipped Clementi with a punch and peppered him with standing-to-ground punches. Seasoned by nearly 70 professional bouts, Clementi weathered the attack and settled for the decision on the scorecards.

“This sport is like everything else in life,” he said. “It has its ups and downs.” Jansen (17-2, 4-0 Bellator) overcame a slow start to record his fourth consecutive victory. The 33-year-old Sports Lab product found another gear in the second round, when he struck for a takedown, passed the Saadulaev guard and ultimately battered him with standing-to-ground punches to the body and head. It took a noticeable toll on the promotional newcomer.

In round three, Saadulaev telegraphed a takedown and left himself exposed. Jansen locked up the choke, jumped into full guard and squeezed his way to the submission.

“I felt pretty confident [in the guillotine],” Jansen said. “I knew I had trapped his arm. It took me a while to wake up. I don’t know why. I’m glad I got better at the end.” Though he had issues employing his vaunted ground game, Held was the aggressor for much of the bout. The 20-year-old scored with a pair of takedowns in the first round and kept Machaev at bay with well-timed left jabs and stinging low kicks in the third.

Machaev (9-1, 0-1 Bellator) did his best work in the second round, when he cracked the Pole with multiple left hooks. However, none of them did enough damage to turn the tide in his favor. The two men battled to a stalemate through the first five minutes. In the second round, Nazare lit up Tirloni (15-2, 2-1 Bellator) with a series of left hooks and had the 29-year-old on his heels. However, Tirloni countered with a searing right hook, followed up with an attempted guillotine choke and drove Nazare to the ground. From there, he set up the brabo choke from side control and forced the tapout. Nazare had never before been submitted. K. Mills
Polley eked past Marrero.
In preliminary action, Lew Polley captured a unanimous decision over UFC veteran Carmelo Marrero in their heavyweight encounter, earning 30-27, 29-28 and 29-28 nods from the judges; Blackman MMA prospect Darrell Horcher kept his perfect professional record intact and knocked out the previously unbeaten E.J. Brooks 21 seconds into their Bellator Season 7 lightweight tournament reserve bout; Cosmo Alexandre forced a doctor’s stoppage against Mike Bannon in between rounds two and three of their lightweight affair; Duane Batress took a split verdict (29-28, 28-29, 29-28) over Ariel Sepulveda at 185 pounds; Brett Martinez submitted Eric Albright with a guillotine choke 3:28 into the second round of their featherweight tilt.