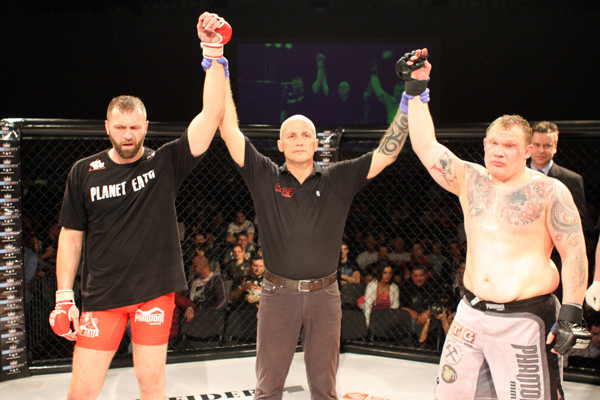 HERNE, GERMANY -- The German fight sport faithful had to wait for more than two years for Deutschland’s premier mixed martial arts organization to hold its third event, and promoter duo Deniz Haciabdurrahmanoglu and Özhan Altintas delivered a show that the country will be talking about for the next couple of weeks.

Saturday’s German MMA Championship 3 had all the ingredients necessary for a great event: Thrilling fights, nasty knockouts and slick submissions – unfortunately, the night did not pass by without its share of controversy as well.

In the main event of the evening, Germany’s top-ranked heavyweight Andreas Kraniotakes appeared to be en route to redeem perhaps his toughest career loss as he raced to an early lead against domestic arch-rival Bjoern Schmiedeberg. The general consensus was that “Big Daddy” took the first three rounds of their five-round title fight for the vacant GMC heavyweight strap via superior wrestling, clinch work and cage control. In the middle stanza, the German-born all-rounder of Greek descent came close to stopping the bout with heavy ground-and-pound in which was arguably a 10-8 round.

With the certain feeling he was well ahead on the scorecards, Kraniotakes put his engine in neutral and coasted in the championship rounds, giving his impression of UFC bantamweight champion Dominick Cruz, foot- and handwork included. Schmiedeberg landed occasional shots, but was too tired to really follow up with anything significant. Just when everybody was about to pop the champagne bottles for Kraniotakes, the three judges spoiled the party by surprisingly scoring the bout 47-47 and 48-48 (twice) -- a draw.

In the co-headliner, Cologne’s Ruben Crawford made short work of French featherweight Nayeb Hezam. The Bellator veteran from just outside of Paris did well early, making Crawford’s life miserable with powerful wrestling and cage work. Just when it appeared that the “Strangler” was starting to unload from top position, Crawford slapped on a triangle choke and held it for the tap at 3:13 in the opening round.

Crawford’s teammate, Chechen wrestler Abusupiyan Magomedov had an even more dominating performance against another of Germany’s rising young talents in Nuremberg’s Jessin Ayari. Magomedov was the physically more powerful man and executed his gameplan perfectly: After an initial flurry from the 20-year-old Tunisian-German, Magomedov hit a switch off an Ayari takedown and landed a well-timed knee strike to the face following another scramble. The resulting ground-and-pound was obsolete, with the stoppage coming at 1:49 in the opening round.

Major controversy surrounded the featherweight title fight between German- Brazilian Martin Buschkamp and Swiss-Albanian Patrik Berisha. Buschkamp dominated the fight from the opening bell with his explosive mix of striking and grappling. An unintentional elbow strike opened up a nasty gash at the back of the head of Berisha. After a doctor’s check, the bout was allowed to continue. Buschkamp continued in dominant fashion with big slams, high-octane positional changes and several submission attempts, including his patented rear-naked choke, triangle armbar and mounted triangle.

Just when Buschkamp was about to finish the fight with brutal ground-and-pound, veteran referee Andreas Stockmann stepped in and halted the bout due to excessive bleeding from the cut. Instead of ruling the fight a technical knockout due to the cut, he inexplicably ruled the fight a no contest, which is impossible under the Unified Rules of Mixed Martial Arts that were being used at the event. Buschkamp’s team have filed a protest to the German Mixed Martial Arts Federation, which is why the official result of the bout is pending until the final verdict is made.

In the fifth and final title fight of the night, Polish submission specialist Marcin Bandel showed world-class ground skills to end Andreas Birgels’ three-fight winning streak and claim the promotion’s vacant middleweight title. The finish came 92 seconds into the opening stanza from an exquisite chain move that included a leglock legtrip to gain top position and an armbar-to-heelhook transition that forced the tap. After the win, the 23-year-old Drysdale brown belt asked for 10 seconds of silence for his father that had passed away in the week of the fight and the sellout crowd respectfully obliged.