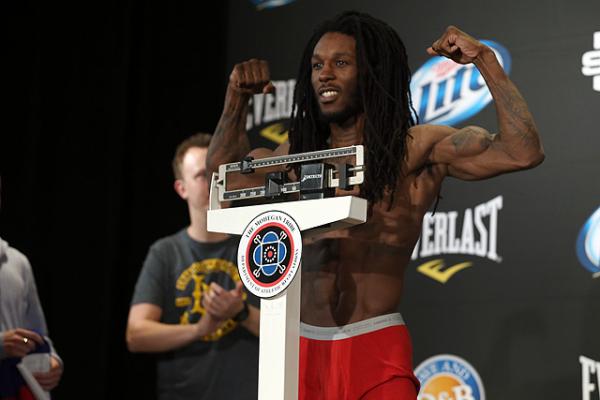 
Desmond Green made his intentions known in Titan Fighting Championship. The man wants some gold.

The 25-year-old Tristar Gym representative knocked out former World Extreme Cagefighting champion Miguel Torres with a knee strike, right uppercut and follow-up hammerfists in the Titan FC 31 main event on Friday at the USF Sun Dome in Tampa, Fla. Green (13-3) brought it to a decisive close 46 seconds into round one, as he improved to 4-1 in his past five appearances.

Backed up to the fence, Torres (43-8) ducked for cover. In his haste, he put himself in harm’s way, ran into a knee from Green, ate a right uppercut and fell to the canvas in a dazed state. “The Predator” pounced with opportunistic hammerfists that left Torres unconscious. The Carlson Gracie protégé had never before been finished so quickly.

Green’s performance helped those in attendance forget about the original headliner -- a five-round lightweight title fight that was cancelled when champion Mike Ricci failed to make weight and challenger Yoshiyuki Yoshida subsequently withdrew.

In the light heavyweight co-main event, Deep veteran Ken Hasegawa kept his undefeated record intact with a unanimous decision over Matt Thompson All three cageside judges scored it the same: 29-28 for Hasegawa (9-0-1).

Outside of a brief third-round punching burst and attempted triangle-armbar, Thompson (19-10) was never much of a factor. Hasegawa was the superior fighter in all phases, as he piled up points with takedowns, ground-and-pound and clubbing overhands with both fists. After a puzzling referee restart -- Hasegawa was in side control at the time -- late in the third round, Thompson had the Japanese judoka reeling with straight punches for a brief moment, but the finish he needed was not in the cards. Hasegawa returned to a dominant position and resumed his attack with elbows and punches from above.

Meanwhile, Hayder Hassan stopped onetime Gladiator Challenge champion Felipe Portela with a crushing right hook and follow-up hammerfists in the first round of their welterweight showcase. Portela (8-2) succumbed to the blows 3:23 into round one.

Hassan (6-1) was in control from start to finish. The powerfully built American Top Team export punched in combination behind a stiff jab and mixed in thudding leg kicks when the opportunity presented itself. With his back to the cage, Hassan lured the Blackzilians representative into an exchange, cracked him with a right hook and then forced referee John Hosegood to act.

The 32-year-old Hassan has won four fights in a row, three of them finishes.

Elsewhere, American Top Team’s Sirwan Kakai submitted the previously unbeaten Joe Barajas with a third-round rear-naked choke in a featured encounter at 135 pounds. Kakai (11-2) finished it 4:30 into round three, as he won for the 11th time in 12 outings.

Barajas (10-1) enjoyed some early success but lacked the firepower necessary to give his counterpart pause. Kakai turned the tide with repeated leg kicks and wore down the Team Xplode MMA prospect with variety in the standup. Counter left hooks, standing elbows in the clinch and close-quarters knees all found the mark. In the third round, Kakai answered a takedown from the Californian by wheeling to his back and sliding into position for the choke. He then cut off all escape routes, forcing Barajas to tap.

Finally, Grudge Training Center’s Tyler Stinson paired stinging counter left hands with chopping leg kicks, as he eked out a split decision over Jose Figueroa in a welterweight showcase. All three cageside judges scored it 29-28, two of them siding with Stinson (28-10).

Figueroa (13-7), who operates out of an American Top Team affiliate in Orlando, had the Bellator MMA veteran reeling more than once but never fully capitalized. Stinson was the aggressor throughout, particularly in the second and third rounds, as his commitment to leg kicks proved increasingly profitable. Figueroa’s mobility grew more and more compromised, the snap in his punches less and less crisp.

Stinson, 28, has rattled off five wins in six appearances.

In preliminary action, former M-1 Global champion Kenny Garner (14-7) took a unanimous verdict from Scott Barrett (15-5) in their 15-minute heavyweight duel, sweeping the scorecards with 30-27, 29-28 and 29-28 marks; American Top Team’s Steve Montgomery (8-2) knocked out Brock Jardine (9-5) with a knee strike 26 seconds into the second round of their welterweight scrap; Michael Graves (4-0) submitted Rafael Souza (6-3) with a rear-naked choke 2:37 into round two of their clash at 170 pounds; Mike Bruno (12-7) walked away with a unanimous decision in his three-round lightweight tilt with Kamrin Naville (7-8), earning 29-28 scores from all three judges; and William Sizemore (1-0) submitted Matt Wagy (3-3) with a guillotine choke 50 seconds into the third round of their bantamweight affair.