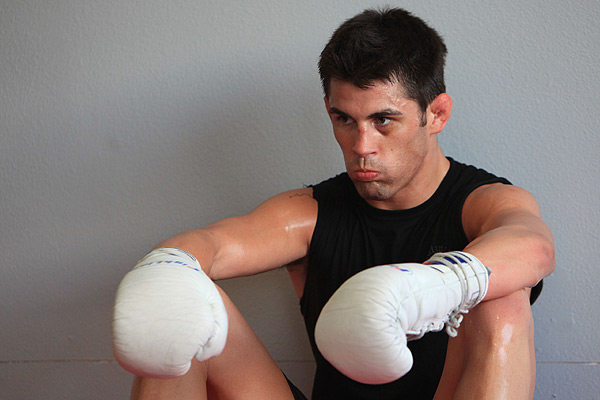 When Dominick Cruz was climbing the ranks, he tried but failed to make it onto “The Ultimate Fighter.”

Now that he’s the UFC bantamweight champion, though, he’s been given a coaching slot on the reality show opposite rival Urijah Faber. Ahead of the 15th season’s premiere Friday on FX, Cruz joined the Sherdog Radio Network’s “Beatdown” show to discuss TUF, Faber and more.

On whether he’ll prank Faber on the show: “I know I’m not the type of person that’s going to go out there and try to instigate something, but at the same time, if somebody’s stepping on my toes, I’m not just going to let them do it. I’m going to retaliate. Things are going to happen, and I think that’s what makes the season so interesting. What’s going to happen? I don’t know. Faber doesn’t know what to expect -- I know that. Nobody knows what to expect. None of the fighters. It’s a brand new format, brand new everything. It’s going to be extremely interesting, and I’m pumped for it.”

On how he’ll pick his team: “For me personally, what’s going to sway me towards picking guys over others is certain guys have a type of arrogance about them. You can feel that right off the bat. The more arrogant they are, the harder it’s going to be to get them to be open-minded and hear the things that I have to teach, the things that my coaches have to teach. At the same time, I want the most mentally tough guys I can find. Because really, when it all comes down to it, that’s what it’s going to be about on this show. It’s 13 weeks trapped in a house with nothing but guys, away from your family, away from your friends, no radio, no books, no television and a liquor cabinet that’s just filled. … I think that the main aspect of this is just going to be keeping their minds right.”

On his coaching experience: “I think, honestly, people are sleeping on me in the coaching aspect, no doubt. To begin, I got into fighting by coaching. I didn’t even start fighting until one of the students that I was coaching told me to come to the gym and try it out. Then when I got in there, the only way that I could pay my dues every month was to teach, clean the toilet, clean the bags and mop the floors. I didn’t pay dues because I didn’t have the money. I taught and I cleaned. I understand what it takes to get to the top. I understand how to start from the bottom and work your way up and I understand what it takes to keep winning and how to keep your mind right … . I think that I can be a real tool for a lot of these guys [with] the things that I’ve been through, coming up in my career.”

On Faber’s potential as a coach: “I think he’s got a lot of experience as well. I can’t take anything away from him. He’s got some tough guys there at Team Alpha Male. He’s helped a lot of those guys do really well. So kudos to him, but I’ve got to worry about myself. I’m not real worried about anything that Faber has done or is going to do on this show. Really I know that he’s coached a lot of guys that I’ve fought and I’ve done just fine against every single one of them.”

Listen to the full interview (beginning at 47:00).