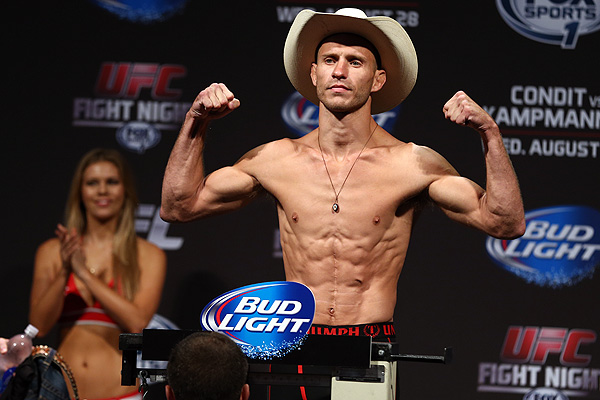 
Lightweight strikers Donald Cerrone and Edson Barboza will do battle this April in Florida.

Fox Sports reported Monday that the 155-pound matchup will be part of UFC on Fox 11 “Werdum vs. Browne.” Headlined by a heavyweight bout between Fabricio Werdum and Travis Browne, the event is set to take place April 19 at Orlando’s Amway Center.

Cerrone, 30, is just over one week removed from his last bout, a first-round knockout of Adriano Martins on Jan. 25 which also aired live on Fox. After the event, “Cowboy” -- who competed inside the Octagon four times last year, going 2-2 -- stated his desire to fight six times in 2014.

Barboza also had a busy 2013 which saw him rebound from the first defeat of his young career. Following stoppages of countrymen Lucas Martins and Rafaello Oliveira, “Junior” closed out the year with a Dec. 14 decision victory against Team Alpha Male representative Danny Castillo.