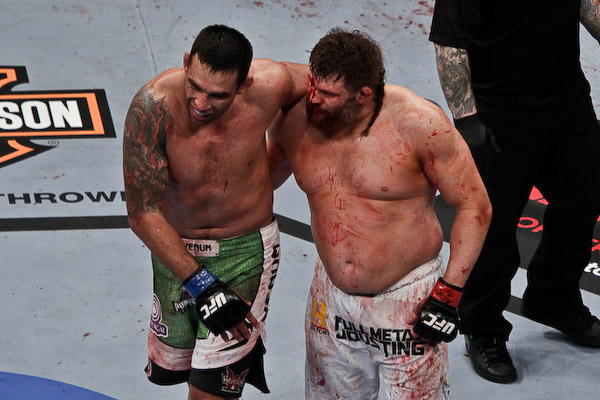 After losing to Junior dos Santos in 2008, Fabricio Werdum embarked on a career outside the UFC, signing with Strikeforce and earning the biggest victory of his life against heavyweight legend Fedor Emelianenko.

The BJJ black belt returned to the Octagon this month with an important victory over Roy Nelson at UFC 143 and is now preparing to serve as Wanderlei Silva’s jiu-jitsu coach on “The Ultimate Fighter: Brazil.” Speaking this week with Sherdog.com, Werdum gave his thoughts on the Nelson fight, why he thinks “Big Country” could flourish at 205 pounds, and his desire to fight on the UFC’s June card in Brazil.

Sherdog.com: Did the fight against Nelson go as expected?
Fabricio Werdum: The concern wasn’t with his tactics, but with our own. I was very focused on training, and what inspired me was Wanderlei’s victory over Cung Le [at UFC 139]. I was there and saw the very good communication between [trainer] Rafael Cordeiro, Andre Dida and Wand. I looked up to that. I saw that Wand followed the tactic strictly, because it was an important fight for him to win. So, I wanted to do the same. What we planned on in training, we did in the fight.

Sherdog.com: Were you impressed by Nelson’s ability to absorb strikes?
Werdum: I was expecting it. It’s a characteristic of Roy’s, to withstand a beating. If there was another fighter who got cut like that, they could be shaken. One thing I didn’t feel from him was his strength. I don’t know if it was the diet or what he did to lose weight, but his strength wasn’t what I expected. We were sparring in the gym with Orlando Sanchez; he’s very strong and 275 pounds, so we hired him. We did a lot of clinch training, but in the fight, I didn’t feel pressure from Nelson. I was careful of his right hand because, yes, it’s heavy, but I didn’t feel his strength in the clinch.

Sherdog.com: How many fights to get to the belt?
Werdum: There’s nothing right now, but I’m pushing to fight at UFC in Sao Paulo. I’ll make it happen. Since I’m part of Wand’s team on “TUF,” it would be cool to fight at this event also, to complete our work. You can do the “TUF” well and then fight.

Sherdog.com: And the reason for entering the fight against Nelson to the song “Ai Se Eu Te Pego” by Michel Telo?
Werdum: When I entered and the song played, I laughed. I like the mood of the music, and it’s so popular in Brazil right now that I thought of the crowd in Sao Paulo singing the song. I’m imagining it in the UFC show in Sao Paulo. It would be like Paulo Thiago’s entrance [at UFC 134 in Rio], where everyone sang “Tropa de Elite.”

Sherdog.com: Roy Nelson’s future is under threat in the UFC. Would you advise him to go down to 205 pounds or to stay in the heavyweight division?
Werdum: I think he’s suited to be stronger at light heavyweight. Maybe it’s just like Samson, cutting his hair and losing his strength (laughs). He showed the world that he can be strong in any category. He knocked out Brendan Schaub and “Cro Cop” [Mirko Filipovic]. He would do well in our division, but I think it’s better for him to go to light heavyweight.