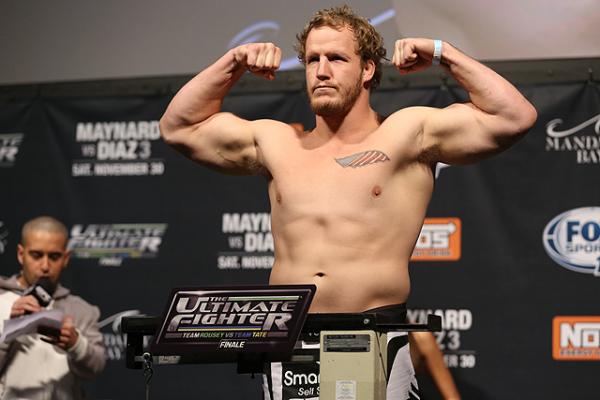 Jared Rosholt recently notched his second win in the UFC, and the 27-year-old expects plenty more to follow in the coming years.

In an interview with the Sherdog Radio Network’s “Beatdown” show, Rosholt discussed his UFC Fight Night win over Daniel Omielanczuk, his future in the sport and much more.

On the effect of the heat in Abu Dhabi and the perspiration it caused: “We were completely caught off guard, to be honest, because when we had talked to other people and read about being over there in Abu Dhabi, we were told it was going to be a dry heat. We were thinking, ‘Oh, it’s going to be like Vegas. It’s going to be dry heat.’ I prefer that myself because when you’re that sweaty and big guys and stuff like that, we sweat a lot anyways, but when it’s humid and hot, it’s twice as bad. That just makes it so hard to try and look for submissions. It’s a lot harder to control people because it’s hard to hold onto them. When you’re going against a guy that is a three-time Polish national champion in muay Thai, you prefer not to stand right in front of him the whole 15 minutes.”

On whether he would have been comfortable standing with Omielanczuk if he’d had to: “Yeah, I think so. I was prepared to stay on my feet with him. I’m always going to expect the worst whenever I’m out there, so I’m always going to prepare for that. The worst thing that could ever happen to me was for me to need a takedown and not be able to get one … but I haven’t met anybody that that’s been a problem with yet. But yeah, I was prepared for him. We studied him well. The guy has some serious kicks on him. Everybody knows his body kicks are no joke, so we were prepared for it. Like I said, he really didn’t have an answer for the takedowns.”

On whether he wants a rematch with Derrick Lewis, who knocked him out in August 2012 and (after this interview) won his UFC debut: “I feel like I’m already past him since I got in the UFC. He’s going to have to catch up to me if that’s going to happen. There’s no reason for me to try to go backward to try and get revenge over a sloppy, sloppy fight. So it’s not a big deal to me really, but if the opportunity arises -- I mean, I was supposed to have that Jan. 25 fight in Chicago. After that guy dropped out with that rib injury, they offered that fight to Derrick Lewis and he turned it down. So I’m not going to go out of my way to try and get back at this guy. It is what it is. If anything, I’d shake his hand and say thanks for beating me that time because I’ve gotten 10 times better because of it.”

On whether he’ll be one of the best heavyweights in the UFC in the next year or two: “I wholeheartedly do believe that. We have a muay Thai coach, Steven Wright, and he’s helped me out a lot. I really haven’t shown a whole lot of my potential on my feet. We go into the workouts and we have boxers come in and I beat them up and they never come back. We had muay Thai [fighters] that came in and same thing. I never get outclassed by anybody, but when you’re out there fighting, sometimes you’re better off using a little bit more of what you know you’re best at. But I still have a lot to get better at. We signed a boxing coach this last year, and since then my boxing’s gotten much better also. We’re evolving in a lot of ways. … I think we’re not even close to being 100 percent of my potential. When that time comes, I don’t see how I can’t be right up there with the top guys.”