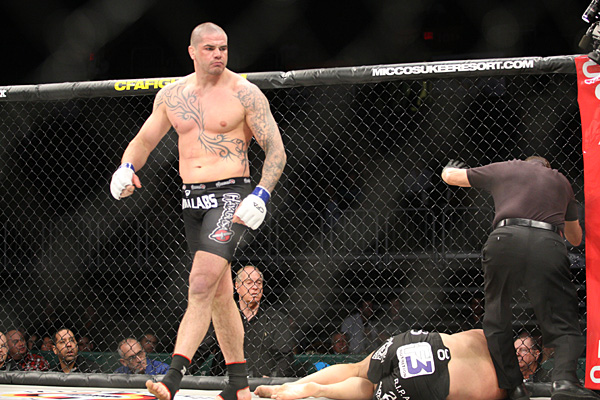 Paul Buentello has a new opponent for his Legacy Fighting Championship debut next month.

Buentello, 39, will make the cut to 205 pounds for the first time in his 16-year career. The onetime UFC heavyweight title contender is currently riding a three-fight win streak, including a pair of victories over previously unbeaten Latvian Igor Kostin. In headlining Legacy FC 22, “The Headhunter” will compete his highest-profile bout since dropping a unanimous decision to then-Bellator champ Cole Konrad in August 2011.

Kickboxing convert McSweeney is best known for his stint on the 10th season of “The Ultimate Fighter,” where he was eliminated in the semifinals by eventual winner Roy Nelson. Since exiting the UFC in 2010 with a sub-.500 record, the 32-year-old “Hammer” has leveled his career mark to a respectable 11-10. McSweeney currently trains under Brazilian jiu-jitsu ace Robert Drysdale and last competed in March, when he stopped Dion Staring in 38 seconds at CFA 10.