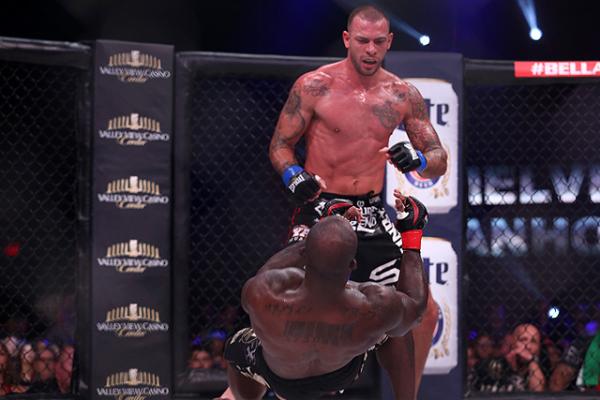 
Joe Schilling has come a long way since he first stepped into the cage for his mixed martial arts debut more than seven years ago.

Schilling himself will be the first to admit he took the “first stepped into the cage” part literally.

“The Joe Schilling that fought [seven] years ago in MMA was just a young kid who was really focused on kickboxing and was taking MMA fights on short notice to try to pay the bills. I had absolutely no ground game. I think the first time I ever set foot in the cage was the first fight for EliteXC,” Schilling told Sherdog.com. “I was not prepared at all and not proud at all in who I was and my lack of taking it seriously.”

His fight against Matt Makowski at ShoXC “Elite Challenger Series” that night ended in predictable fashion: a relatively quick submission defeat. That was a common theme during Schilling’s initial foray into the sport, as three of the muay Thai specialist’s first four bouts ended with him tapping in surrender.

He returned to MMA last November with a new focus, and he flattened Melvin Manhoef at Bellator 131, a finish that earned recognition as one of 2014’s best knockouts . The Los Angeles resident will return to action at Bellator 136 on Friday, when he squares off with Brazilian knockout artist Rafael Carvalho in a featured middleweight contest at Bren Events Center in Irvine, Calif.

While his calling card -- bone-crushing power -- remains the same as it did in 2008, Schilling feels that today he is much more versed in the nuances of MMA.

“I was trying to stay busy, and kickboxing back then was extremely difficult. I was a professional athlete, a professional fighter with bills to pay and there were no fights,” he said. “They offered me a fight on two weeks’ notice in MMA. I thought, ‘I’m just gonna go out there and knock this guy out before he takes me out.’ Of course, that’s not at all what happened: I got taken down and submitted pretty regularly when I was doing that.

“I just didn’t take it seriously back then. I wasn’t at the level of kickboxing that I am now, so I think it’s just overall I’m a much more mature, much more serious athlete now.”

These days, Schilling has been taking things seriously enough that he’s confident he can handle himself most anywhere a fight goes -- not just on the feet. However, Schilling still has a very specific preference when it comes to the type of opponents he’d like to face. Just because he can defend against takedowns and submissions doesn’t mean he’d like to spend three rounds doing so.

“It’s not necessarily a comfort thing. Do I want to train for four months to get in there and defend takedowns for three rounds? That doesn’t sound like a whole lot of fun to me,” he continued. “Do I need to get prepared to do that? Yeah, and I’m working on that all the time. I think styles make fights, and it’s not a fight that I would even enjoy watching, let alone being in one.”

On paper, at least, Carvalho fits the mold of an opponent who should be willing to engage in Schilling’s preferred method of combat. The 28-year-old Rio de Janeiro native has finished nine of his 10 career victories via knockout or technical knockout, including a first-round stoppage of Brian Rogers in his Bellator debut.

While Schilling appreciates Bellator President Scott Coker’s sense of what constitutes an entertaining matchup, he is quick to point out that the promotion isn’t exactly feeding him cans.

“I definitely don’t feel like Bellator is doing any favors or giving me matchups that I’m supposed to win,” he said. “They’re giving me matchups that are going to be exciting fights. I don’t think that anybody would say getting their first fight in six years against Melvin Manhoef would be a favor to anyone. Scott Coker understands that styles make fights.”

Thanks to the brutal KO of Manhoef, Schilling has arguably the toughest act of all follow: himself. No longer is MMA simply a quick financial fix. Instead, it’s a serious career endeavor, one that comes with a certain level of expectations. A younger Schilling would have never seen this day coming.

“When I started out kickboxing years and years ago when I was 15, and I was fighting in Toughman contests and kickboxing events back in Ohio, they didn’t call [it MMA]; it was called NHB,” he said. “We’d sit there and laugh at these chubby wresters rolling around on the ground that had really no skills. The tables got turned on me when MMA blew up and became such a huge sport. I definitely went the long road and the hard road to where I’m at today.”