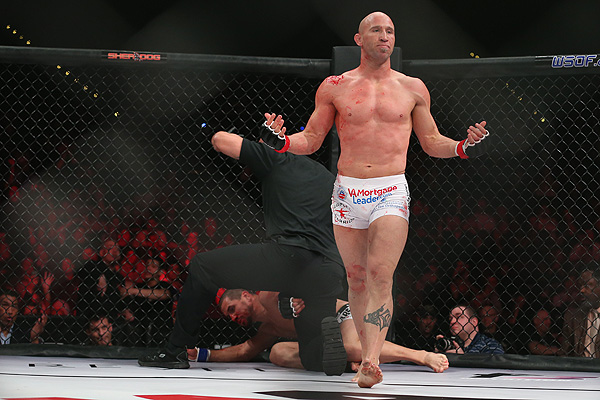 WSOF President Ray Sefo revealed the booking to MMAFighting.com on Wednesday, and Sherdog.com subsequently confirmed the pairing with a source close to the promotion. The bout was initially announced during last Saturday’s WSOF 2 broadcast, but that announcement appeared premature when Burkman expressed his desire to fight Fitch for the first WSOF welterweight title if Fitch first earned the shot by picking up a win.

Burkman today told Sherdog.com that he meant no disrespect toward Fitch and that he only meant to convey his enthusiasm about fighting for a title. The fighter said that while contracts have not been signed, he is currently negotiating with the promotion and is confident that the bout will come to fruition. WSOF 3 takes place June 14, though a venue has not yet been announced for the event.

Fitch and Burkman first met in the UFC nearly seven years ago, with Fitch emerging victorious via second-round rear-naked choke. Despite his longtime status as one of the world’s best welterweights, Fitch, 35, was released from his UFC contract following a one-sided decision loss to grappling ace Demian Maia last month at UFC 156. Fitch posted 21 wins in 22 bouts from 2003 to 2010 and has been finished just three times in 31 pro outings, though he has gone just 1-2-1 in his last four fights.

Burkman, 32, received his UFC release in 2008 and has since won seven of his last eight fights, with his lone loss in that span coming via decision to Canadian prospect Jordan Mein. “The People’s Warrior” made his WSOF foray at the promotion’s debut show last November, taking a unanimous decision from Gerald Harris before blitzing Aaron Simpson last Saturday en route to a first-round knockout at WSOF 2.