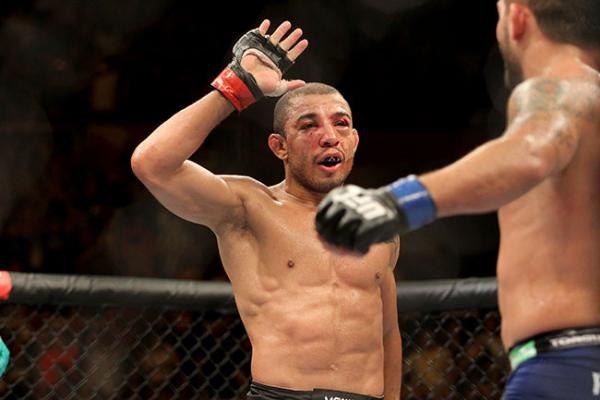 Jose Aldo is already plotting his next move after UFC 189. | Gleidson Venga/Sherdog.com


While Jose Aldo already has a title defense scheduled against outspoken Irishman Conor McGregor at UFC 189 "Aldo vs. McGregor" on July 11, the reigning featherweight king said his next move has already been planned.

He just isn’t ready to reveal exactly what it is.

“One step at a time,” Aldo told Sherdog.com following a recent sparring session at Nova Uniao.” I have a tough fight with McGregor, and that´s my goal now. After that fight, you will know what is gonna happen. The UFC knows, I know, and everything is already set.

“As soon as I beat McGregor, you will know what´s gonna be my next step.”

On Saturday, would-be Aldo foe Anthony Pettis defends the lightweight strap against Rafael dos Anjos at UFC 185 in Dallas. An Aldo-Pettis bout was rumored for the summer of 2014 -- UFC boss Dana White even said it was booked -- bout that bout never came to fruition. If things go as Aldo expects this weekend, dos Anjos will be the new 155-pound champion.

“Rafael is showing a great evolution lately, and I believe he has the tools to beat Pettis,” Aldo said. “I really expect that, because Brazil never had a champion in that division.”

Recently, Aldo was mentioned in another potential cross-divisional matchup, as reigning bantamweight titlist T.J. Dillashaw expressed interest in facing the Nova Uniao standout at featherweight in an interview MMAJunkie.com. That, of course, was before McGregor dispatched Dennis Siver on Jan. 18 to become the division’s No. 1 contender.

While the notion does have its appeal, Aldo anticipates victory for his teammate, ex-champ Renan Barao, when he rematches Dillashaw at UFC 186.

“He doesnt know where he is going. Certainly I would pass over him,” Aldo said. “But now I have to keep my focus on my next challenge.”