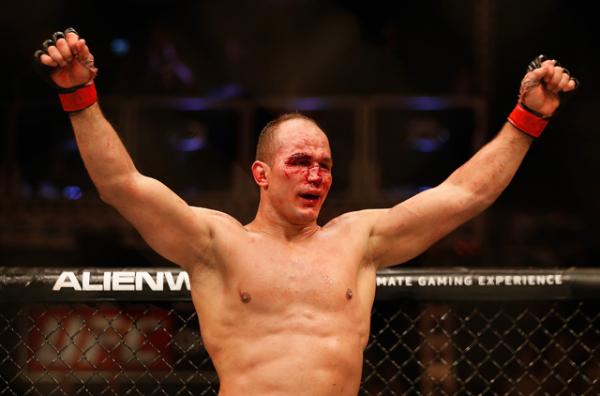 
Not much separated Junior dos Santos from Stipe Miocic after five rounds.

Beaten to a bloody pulp, the tough-minded and durable dos Santos leaned exclusively on his boxing skills in capturing a unanimous decision from the Strong Style Fight Team standout in the UFC on Fox 13 headliner on Saturday at the US Airways Center in Phoenix. All three judges sided with dos Santos (17-3, 11-2 UFC): 48-47, 49-46 and 49-46.

Miocic (12-2, 6-2) has never looked better. He cracked the favored dos Santos repeatedly with right hands, landed beautiful power punches while exiting clinches and mixed in a second-round takedown. Miocic had the Brazilian reeling more than once with high-velocity shots but could not find a way to put away the former champion.

Dos Santos briefly floored him with a counter left hook in the third round, executed an exquisite trip takedown in the fourth and scored with a stinging jab throughout. He also invested heavily in body shots with left hooks and straight rights -- a strategy that seemed to take the spring out of Miocic’s step late in the fight. Both men had their moments in the fifth despite being bloodied and exhausted, closing out a memorable 25-minute confrontation

Diaz (17-10, 12-8 UFC), who missed weight by more than four pounds, looked lethargic and at times disinterested. Dos Anjos battered the inside and outside of his lead leg with crippling kicks throughout the first round, rendering the Californian virtually inept from an offensive standpoint. The Brazilian opened a cut near Diaz’s eye with a straight left in the second round, mixed in takedowns and answered his opponent’s taunts and slaps from the bottom by piling up points with ground-and-pound.

Dos Anjos is 7-1 over his last eight fights, having lost only to the undefeated Khabib Nurmagomedov.


Former Strikeforce and Dream champion Alistair Overeem took care of fellow Dutchman Stefan Struve with punishing first-round ground-and-pound in their featured heavyweight contest. Struve (25-7, 9-5 UFC), who had not competed in nearly two years, succumbed to the blows 4:13 into round one.

Overeem (38-14, 3-3 UFC) executed a takedown roughly two minutes into the match and probed for openings from top position. The 34-year-old ultimately funneled Struve towards the base of the cage and unloaded with a series of jackhammer standing-to-ground lefts and rights, prompting referee “Big” John McCarthy to intervene on Struve’s behalf.


Blackzilians representative Matt Mitrione wiped out Gabriel Gonzaga with a short left hook and follow-up ground-and-pound in the first round of their heavyweight showcase. Mitrione (9-3, 9-3 UFC) brought it to a close 1:59 into round one, pushing his winning streak to three fights.

Gonzaga (16-9, 11-8 UFC) had issues with “The Ultimate Fighter” Season 10 graduate’s speed and footwork. Mitrione drew the Brazilian into range, dropped him to his knees with a two-punch combination and went to work with standing-to-ground punches. The 36-year-old took a step back when the desperate Gonzaga clutched for his legs and blasted him with one last right hand for the finish.

Jedrzejczyk connected on the most significant blow of the bout in the closing seconds of the first round, where she floored the three-time Brazilian jiu-jitsu world champion with a ringing right uppercut and pounced with hammerfists. The break between rounds allowed Gadelha to clear her head, but she struggled to establish any kind of offensive rhythm. Jedrzejczyk had answers for many of her takedowns and scored often when the two traded punches on the feet.

An inadvertent head butt initiated by Gadelha (12-1, 1-1 UFC) resulted in a nasty gash above the Brazilian’s left eye in the third round. She struck for a pair of takedowns over the final five minutes, but a path to the submission she desired did not present itself.

Moraga (16-3, 5-2 UFC) survived a harrowing exchange in the first round, where he paused to complain about an inadvertent low blow. Referee Jason Herzog informed the two flyweights that he did not see the foul and implored them to continue. However, Moraga turned his back to plead his case, and an opportunistic Gates pounced, blindsiding him with a right hand before nearly locking in a rear-naked choke. Moraga escaped and turned up the heat in the second and third rounds. Slowed by a steady diet of leg kicks, Gates looked lost in the clinch, where the Arizonan chipped away at him with knees to the thigh, short punches and standing elbows.

In the third round, Moraga again moved into clinch range, executed a trip takedown and assumed top position on his wilting counterpart. Heavy, elbow-laden ground-and-pound then softened Gates for the choke and led to the tapout.

Moraga, 30, has won 10 of his past 12 fights, losing only to Demetrious Johnson and John Dodson.


An apparent neck injury forced Joe Riggs to submit to American Top Team’s Ben Saunders in the first round of their preliminary welterweight clash. The anticlimactic conclusion came 57 seconds into round one, as Riggs submitted within the “Killa B” guard.

Riggs (40-15, 4-5 UFC) -- who had not fought inside the Octagon in eight years -- moved in on a double-leg, hoisted Saunders skyward and put him on the mat, injuring himself as he did so. Soon after, “Diesel” asked out of the match, bringing an end to his streak of six consecutive wins. A graduate of “The Ultimate Fighter 7,” Saunders (18-6-2, 6-3 UFC) has rattled off five victories in his last six outings.


Drew Dober submitted former World Extreme Cagefighting champion Jamie Varner with a first-round rear-naked choke in a brief and bizarre undercard duel at 155 pounds. Dober (15-6, 1-2 UFC) finished it 1:52 into round one.

Varner (21-11-1, 3-6 UFC) whiffed on a lateral drop, striking his head on the mat in the process. The sequence left him dazed and vulnerable, and Dober immediately climbed to mount. Punches fell next, and Varner rolled to his stomach in a desperate attempt to free himself from danger. Dober then cinched the choke for the tapout, snapping his two-fight losing streak.

Afterward, the 30-year-old Varner, a loser in each of his past four fights, announced his retirement.


MMA Lab representative Bryan Barberena put away Joe Ellenberger with third-round ground-and-pound in a preliminary lightweight tilt. Barberena (10-2, 1-0) drew the curtain closed 3:24 into round three, as he recorded his seventh consecutive victory.

Ellenberger (15-2, 1-1 UFC) enjoyed success with his takedowns but accomplished little else. His pace slowed to a crawl in the second round, allowing Barberena to seize control. The Octagon rookie capitalized, and in the third round, he dropped Ellenberger with a multi-punch burst punctuated by a crisp right hook. From there, Barberena increased the intensity of his ground-and-pound, trapped the Nebraskan at the base of the cage and took care of his remaining business with unanswered punches.

The defeat was Ellenberger’s first since October 2011.


Takedowns and a heavy top game carried MMA Lab export David Michaud to a unanimous decision over Garett Whiteley in an undercard battle at 155 pounds. Michaud (8-1, 1-1 UFC) swept the scorecards with 29-28, 29-28 and 30-27 marks.

Michaud struck for takedowns in all three rounds and applied mild ground-and-pound to the Indianapolis native, chewing up time with top control. Whiteley fought effectively from his back, opening a cut near the South Dakotan’s right eye with a short elbow that painted the canvas red in the second round. Blood poured out of the wound for the better part of two rounds, drenching both men as they jockeyed for position. Michaud slowed visibly down the stretch, but a pair of third-round takedowns sealed it for him in the eyes of the judges.

Whiteley (7-3, 0-3 UFC), who trains under “The Ultimate Fighter” Season 4 finalist Chris Lytle, has lost three fights in a row.


Henry Cejudo lived up to his gold-medal pedigree, as he kept his perfect professional record intact with a lopsided unanimous decision over Dustin Kimura in a preliminary bantamweight affair. All three cageside judges scored it the same: 30-27 for Cejudo (7-0, 1-0 UFC).

Kimura (11-3, 2-2 UFC) had no answers. Cejudo cracked him with clean punching combinations throughout the 15-minute fight, mixing in knees and kicks to the body. The 2008 Olympic gold medalist floored Kimura with a searing straight right hand in the first round and had him bleeding from multiple cuts, one near his right brow and another on his right cheek, by the end of the second. Cejudo kept his foot on the gas in round three, where he kept the Hawaiian off-balance and tentative with a polished and efficient standup attack.


Ian Entwistle spoiled the organizational debut of former Maximum Fighting Championship titleholder Anthony Birchak with a first-round heel hook in an undercard scrap at 135 pounds. Birchak (11-2, 0-1 UFC) tapped out 64 seconds into round one, his five-fight winning streak at a painful end.

Birchak struck for a quick takedown behind a Superman punch and postured inside the Englishman’s guard, leaving his foot vulnerable while he dropped heavy blows. Entwistle (9-2, 1-1 UFC) bit down on the heel hook, maintained the maneuver through a series of defensive rolls from the Arizonan and ultimately secured the finish.