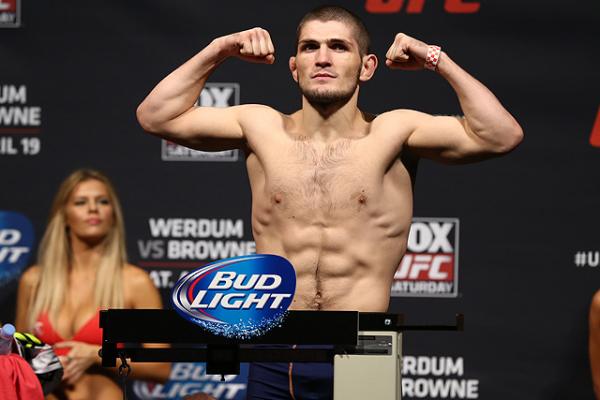 
The extended layoff for one of the lightweight division’s top contenders will continue at least until the fall.

According to a report on Thursday’s edition of UFC Tonight, a torn meniscus suffered in sparring forced Khabib Nurmagomedov to withdraw from his proposed 155-pound clash with Donald Cerrone at UFC 187. The American Kickboxing Academy product will undergo surgery in Los Angeles on Friday and is expected to be sidelined for four to six months.

Nurmagomedov has not competed since April 19, 2014, when he captured a dominant unanimous decision triumph over current lightweight king Rafael dos Anjos at UFC on Fox 11. “The Eagle” was originally paired with Donald Cerrone at UFC 178, but a torn ACL forced him to withdraw from that contest.

According to UFC President Dana White, Nurmagomedov would still have been next in line to challenge then champion Anthony Pettis, but his delayed recovery process from the torn ACL allowed dos Anjos to receive the next title shot and defeat “Showtime” at UFC 185.

On Thursday, the Las Vegas-based promotion announced that John Makdessi would replace Nurmagomedov on the May 23 card against Cerrone.