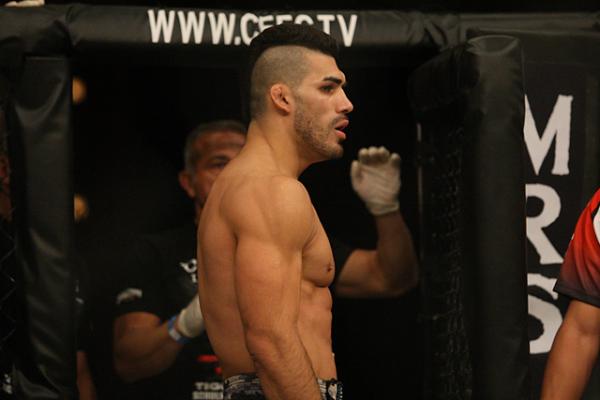 After an early feeling out process, Good found an opportunity to end the fight late in the first round. “Cyborg” buckled Burrell with a flurry of punches, then did it again when Burrell arose from the first knockdown. After flooring his opponent for the second time, Good got on top and latched on a rear-naked choke, forcing Burrell to submit at the 3:47 mark.

Good, who claimed the CFFC interim welterweight belt in February, is now the promotion’s sole 170-pound ace, with former champ Jonavin Webb having departed for the UFC. After his win, the Team Tiger Schulmann fighter said he felt Burrell was “eventually going to get tired” but knew to be cautious when working for the finish.

“You’ve got to train for that... because you don’t want to gas yourself out going too hard,” Good told Sherdog.com. “It’s like smelling blood in the water. You sense that your opponent is in danger, and you’ve got to leap on the opportunity, but you have to be smart about it and not punch yourself out.”

“I’ve been trying to perfect myself with everything, especially the finishing,” Rivera said after the bout. “I knew coming in here, I’ve seen [Beebe] get knocked out before. I didn’t think he had a great chin. I knew he was going to try and wrestle me, take me down to the ground. That’s not where I wanted to be. I’m really focused on finishing every fight, whether it’s submission or knockout.”

Rivera, who will be among the featured fighters when CBS Sports Network broadcasts CFFC 48 on Thursday, took as a positive the opportunity to showcase his skills to a national audience.

New Jersey MMA veterans Jeff Lentz and Jared Gordon met in a bout to crown a new CFFC featherweight champion. Gordon stuck with Lentz through the first two rounds, but Lentz overwhelmed his opponent with a slew of strikes in the third. With Gordon’s eye swollen shut, the cageside physician deemed him unfit to continue, awarding Lentz the vacant belt after three rounds.

“I wish it would’ve ended differently,” Lentz said after the bout. “He’s a tough competitor. It’s not the way I wanted it to end but, hey, a win’s a win.”

The first bout of the CBS Sports Network main card featured unbeaten lightweight Justin Bonitatis taking on Josh Mayville. Bonitatis started out fast in his third professional bout, just as he had in his previous appearances. This difference this time was Bonitatis maintaining his pace through the following frames, eventually punching out Mayville at 2:22 of round three.

“When I get locked in the cage, sometimes I’m in my head too much and I tend to lose my technique,” Bonitatis told Sherdog.com after the bout. “I do have technique, but other than that, my cardio is consistently getting better... The more cage experience I get, the more my gas tank is going to grow, and once it grows, I’m going to be tough to beat.”

Ricky Bandejas scored a decisive finish in his bantamweight bout with Leo Muniz. After an indifferent first round, Bandejas seemed to summon up his “hulk strength,” picking up Muniz and slamming him to the ground. The slam bounced Muniz’s head off the canvas, knocking him out and prompting referee Gary Copeland to stop the bout at 2:20 of the second round.

In a bout likely to determine the next CFFC flyweight title challenger, Claudio Ledesma took a controversial decision over Evan Velez with scores of 29-28 on all three cards.

What was expected to be a showcase fight for welterweight Sean Brady turned into a competitive affair against the longer Jake Gombocz. Brady was able to parlay a strong first round and a spinning backfist in the third into a unanimous decision (29-28, 29-28, 29-28).

Pellegrino MMA lightweight Kevin Roddy earned the first finish of the night, submitting Trevor Suter with an armbar at 1:28 of round one.

The opening bout of the evening saw bantamweight “Little Godzilla” Giorgi Kudukhashvili overwhelm Jorge Martinez on his way to a unanimous decision (30-27, 30-27, 29-28).