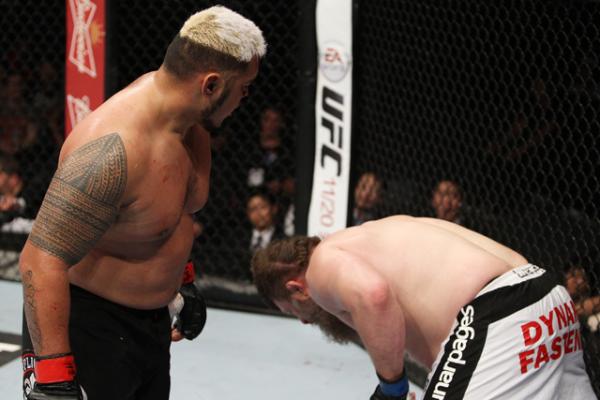 
UFC Fight Night “Hunt vs. Nelson” is in the books, with the heavyweight main event of Roy Nelson against Mark Hunt ending as many predicted, with a knockout.

The five-round affair only lasted eight minutes, as Hunt caught “Big Country” square on the chin with a perfectly-timed uppercut which sent Nelson face first to the mat. The loss was the second via knockout in Nelson’s 10-year career.

Hunt continues to impress in the UFC, parlaying his legendary performance against Antonio Silva with a equally satiating outcome for fans of “The Super Samoan.”

After the bout, Hunt kept it simple in regards to what he hopes comes next.

With the victory, Hunt stretches his record to (10-8-1), with an impressive (5-2-1) mark under the UFC banner. Nelson (20-10, 7-6 UFC) has now dropped three out of four fights, all to elite competition with the likes of Stipe Miocic, Daniel Cormier and now, Hunt.

Jury rocked “The Fireball” with a right hand, who had absolutely no answer to the young 25-year-old lightweight. Jury followed, ending the bout swiftly with unabated shots to the head of the former Pride Fighting Championships fighter.

“I have been a fan of Gomi since I was 16, getting a chance to fight him here in Japan is a huge moment in my career,” Jury said after the bout. “I want to get that belt one day, but it’s up to my management to figure that out.”


With no action inside the Octagon since 2012, both Yoshihiro Akiyama (14-5 2 NC, 2-4 UFC) and Amir Sadollah (6-5 UFC) came into Saturday looking to get back on track. In the end, it was a successful homecoming for “Sexyama,” as the 39-year-old cruised to a unanimous decision victory.

Sadollah utilized right and left head kicks early and often to try and stop Akiyama, but it was the punching power of Japanese superstar that was the difference. Akiyama was able to sneak shots through the defense of Sadollah, breaking his nose early. Akiyama seemed to get stronger as the fight went on, pouring on the punishment with vicious ground-and-pound that nearly garnered a finish late in the third round.

After the fight, the former K-1 competitor requested a bout with a surprising, yet retired UFC fighter.

With the win, Akiyama emphatically ended a four-fight losing streak, his first win under the UFC banner since grabbing a split decision from Alan Belcher at UFC 100.

Sadollah, who has spent his entire career with the Las Vegas-based promotion, has now lost four of his five fights via unanimous decision.


Miesha Tate (15-5, 2-2 UFC) was able to neutralize the wrestling of Rin Nakai (16-1-1, 0-1 UFC) en route to a unanimous decision victory. “Cupcake” gave up her back at two separate instances during the scrap, which led to Nakai frantically attempting to finish the bout via submission. In the end, Tate’s focus on shoring up her striking earned her the win.

“I wanted to keep this on the feet to show that I have a strong striking set, I’m working on it, but I think I did a good job of it tonight,” Tate said after the fight.

With the win, Tate now turns her attention towards avenging her TKO loss to Cat Zingano at “The Ultimate Fighter 17” finale.

“I would really like [to fight] anybody, but I really want that rematch with Cat Zingano, I feel like I have some unfinished business there now that she’s back in the game.”

Kunimoto Moves to 3-0 in UFC


Richard Walsh (8-2, 1-1 UFC) dropped Kiichi Kunimoto (18-5, 3-0 UFC) with a right cross to the jaw in the opening round, followed by a knee that clearly broke his opponent's nose, but ended up dropping a split decision to the Japanese fighter.

The second round was close, with Walsh getting the better of Kunimoto in the clinch, all the while Kunimoto tried to take the fight to the mat unsuccessfully. The third was definitive for the former Pancrase competitor, scoring a takedown and taking the back of Walsh for the better part of five minutes, actively seeking the rear-naked choke. Kunimoto pushed his record to (3-0) in the UFC, while Walsh dropped to .500.

Following a body shot that nearly crumpled “The Heat,” Horiguchi began to pour on the punches. Delos Reyes stood in the pocket and attempted to exchange with the 23-year-old, but in the end, the Krazy Bee product’s striking skills were too much to handle. With the technical knockout victory, Horiguchi has now won eight straight fights and looks to be in line for a top-10 opponent.

Kanehara nearly finished “Bruce Leeroy” on the feet in the opening round, rocking the 26-year-old with shots worthy of a stoppage from referee Leon Roberts, but Caceres held on. The second was again all Kanehara, as this time he was able to grab hold of Caceres’ back. Caceres began to get the better of the striking exchanges late, but in the end all three judges scored the bout (29-28) for Kanehara. “The Ultimate Fighter 12” competitor has now dropped two straight since his upset of Sergio Pettis at UFC on Fox 10

Kikuno Bounces Back with Submission Win


Katsunori Kikuno (22-6, 2-1 UFC) now has three submission victories in his MMA career and all have come via rear-naked choke.

Sam Sicilia (13-5, 3-4 UFC) was only able to muster one full round with the Japanese fighter, putting together a few strong punching combinations toward the end of the first round. The former Deep lightweight champion slammed Sicilia to the mat in the decisive second round and sunk his hooks in, ultimately maneuvering into the fight-ending submission. The loss dropped Sicilia, a “The Ultimate Fighter 17” alum, to under .500 in his UFC career.

Lim officially bounced back from his gutsy unanimous decision loss to Tarec Saffiedine at UFC Fight Night “Saffiedine vs. Lim” and pushed his mark to 3-1 in the UFC. Sato has yet to taste victory since joining the Zuffa ranks, doubling down on technical knockout losses.

After rocking Tanaka with a shot in the opening round, “Mr Perfect” wasn’t able to secure a rear-naked choke and from there Tanaka worked his way back into the bout. The 23-year-old took the fight to the mat in the second, clearly leveling the scorecards at one round apiece before a razor-thin final round that ultimately two judges saw in favor of the South Korean. The loss is the first on the record of Tanaka, while Kang has now strung two wins together under the UFC banner.

“Hollywood” spent a good portion of the opening five minutes working those infamous Octagon jitters out of his system from his back following a takedown. After some sound advice from his Alliance MMA training staff, Case let his hands go, clipping Tokudome and then sinking in a deep standing guillotine for the finish. The loss marks three straight under the Zuffa banner for the Japanese fighter, while Case took home his ninth straight win.


Maximo Blanco (17-6-1, 3-3 UFC) made a mess of Daniel Hooker's face (12-5, 1-1 UFC) over the course of three rounds, utilizing his unorthodox striking to take home the close, albeit unanimous-decision victory.

Blanco took the fight inside, neutralizing the reach advantage for the New Zealand native and ultimately opened a huge cut over the right eye of his opponent. The third frame saw a drop in output of Blanco, but Hooker wasn’t able to garner a late finish. Blanco picked up his sixth consecutive victory with the unanimous (29-28) decision.