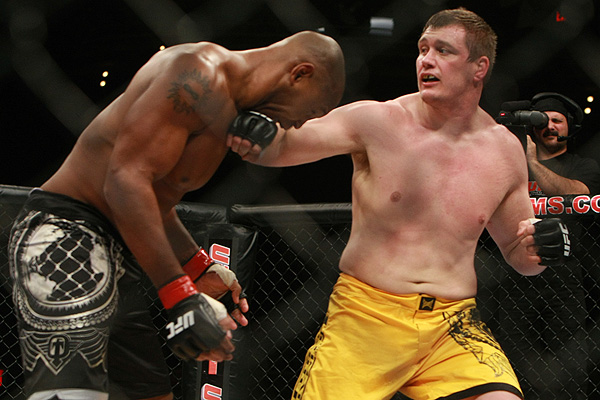 Matt Mitrione will replace an injured Shane Carwin at “The Ultimate Fighter” Season 16 finale, meeting Roy Nelson in a heavyweight duel at the Dec. 15 event.

Promotion officials announced the news on Thursday afternoon. The “TUF 16” finale takes place at The Joint at the Hard Rock Hotel and Casino in Las Vegas and airs live on the FX network. The event will also showcase a lightweight pairing between former WEC champion Jamie Varner and heavy-handed Melvin Guillard, as well as a featherweight scrap pitting rising talent Dustin Poirier against “TUF 12” winner Jonathan Brookins.

Carwin’s withdrawal from the event was announced yesterday by UFC President Dana White, who relayed that the former interim heavyweight champion had suffered a serious knee injury.

Mitrione now steps in on just four weeks’ notice to meet Nelson, his former cast mate on “TUF 10.” Since his time on the reality show, Mitrione -- a former NFL player -- has gone 5-1 in the Octagon, suffering his lone career defeat to Cheick Kongo in a lackluster affair just over one year ago at UFC 137. “Meathead” was expected to return to the cage on Dec. 29 to face Philip De Fries at UFC 155, but De Fries will now receive a new opponent.

Nelson, meanwhile, has gone from “TUF 10” winner to “TUF 16” coach in the span of three years. The former IFL heavyweight champion has won two of his last three, most recently taking out EliteXC vet Dave Herman in just 51 seconds this past May at UFC 146. Prior to that triumph, Nelson was outstruck by the larger Fabricio Werdum to kick off 2012, dropping a unanimous decision to the Brazilian on Feb. 4.