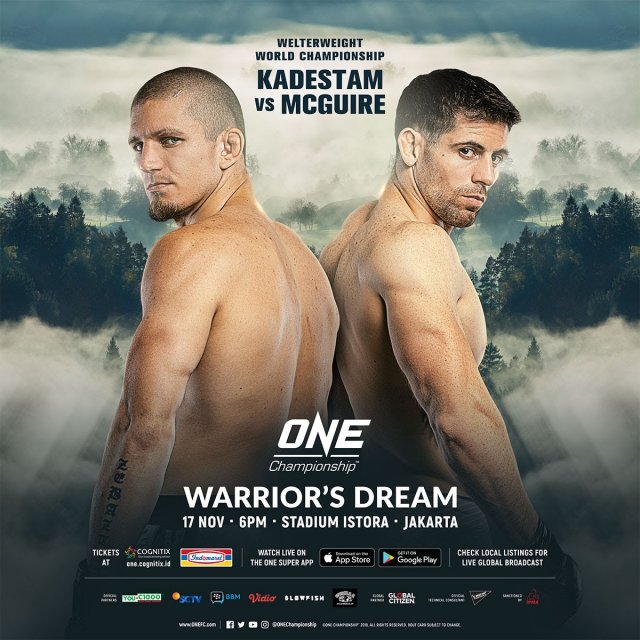 In One Championship’s return to Jakarta on Nov. 17, two welterweights will collide to vie for the belt vacated by former champion Ben Askren, who is heading to the Ultimate Fighting Championship in a blockbuster “trade” for the UFC’s Demetrious Johnson.

In its official press release, the promotion announced the entire lineup for the event. Competing for the vacant welterweight strap will be former challenger Zebaztian Kadestam (10-4) against the surging Tyler McGuire (11-0).

Kadestam bounced back after losing by knockout to Askren last year and is coming off a knockout win over Agilan Thani this past July. Prior to his bout with Askren, Kadestam became one of only two fighters to defeat nearly 80-fight vet Luis Santos since 2012. The other man to defeat Santos in that time? McGuire.

McGuire made his successful One Championship debut against Santos as the co-main event on the July card headlined by Kadestam and Thani. Undefeated as a professional since making his debut in 2015, McGuire has finished eight of his 11 opponents, all in the first round.

“Warrior’s Dream” also offers a muay Thai rematch between Lerdsila Phuket Top Team, who once held a win streak of 100 straight. He will run it back with Cambodian Kun Khmer practitioner Sok Thy, after the two first met in June, where Lerdsila edged Thy in a controversial split decision.

One Championship: Warrior’s Dream will take place in Jakarta, Indonesia at the Gelora Bung Karno Sports Palace on Nov. 17, 2018.