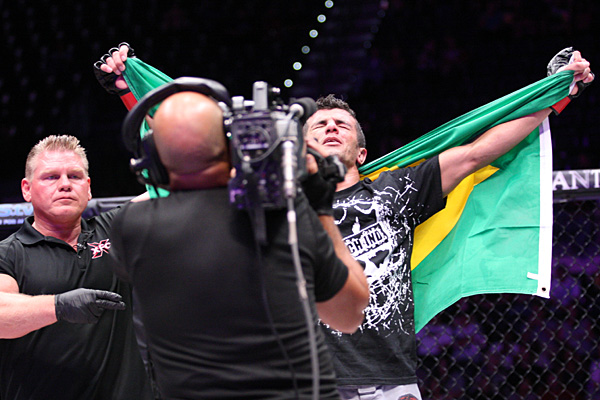 
It took 25 hard-fought minutes to get there, but Deivison Francisco Ribeiro is the Xtreme Cagefighting Championships first featherweight titlist.

Ribeiro earned a unanimous decision over Farkhad Sharipov in the XFC 27 headliner at the L.C. Walker Arena in Muskegon, Mich., on Friday night to capture the promotion’s 145-pound strap. Cageside judges scored the bout 50-45, 49-46 and 50-45 for the Brazilian, who improves to 3-1 under the XFC banner and 26-9-1 overall.

The fight was more competitive than the final scorecards would seem to indicate. Ribeiro landed the heavier shots throughout, although it took him a couple rounds to be able to consistently time his counters. While Ribeiro was able to connect with his right hand on a regular basis, Sharipov was never out of the fight, as he continued to press the action in the championship rounds. Ultimately, it was Ribeiro’s ability to land harder blows and keep the fight upright that proved to be the difference. Sharipov, who has now lost three of his last four bouts, falls to 14-6 overall. .

In the co-main event, King the Cage and Bellator veteran Dom O’Grady put a damper on Eric Reynolds’ XFC title hopes with a submission victory in their lightweight showdown. The end came 1:42 into the second frame, as O’Grady attached himself to Reynolds’ back and secured a rear-naked choke.

Reynolds (18-8), who scored a 30-second knockout of former UFC talent Anton Kuivanen in his last outing, had some success relying on his superior quickness to land punches and kicks in the early going. O’Grady (16-6-1) was undaunted, however, and was eventually able to close the distance and neutralize his opponent’s offense. He used an ankle pick to take Reynolds to the ground early in round two and quickly moved to Reynold’s back. Reynolds returned to his feet and attempted to dislodge O’Grady by falling backward, but the Detroit native maintained his grip and eventually earned the tapout.

Earlier, Dave Courchaine scored the 10th knockout victory of his professional career, stopping the overmatched Alexander Trevino with an overhand right 37 seconds into the second round of their lightweight encounter.

The man known as “Insane” was never in danger. He walked his opponent down throughout the opening period and landed multiple knockdowns. For the most part, Courchaine (16-6) was simply content to allow Trevino (5-4) to return to his feet and resume the assault. Trevino, meanwhile, spent the entire bout in retreat mode until he was floored for the final time in the second round.

It took a little more than two rounds, but Dequan Townsend was finally able to put a screeching halt to the unorthodox, and sometimes maddening, movement of kung fu stylist Marcus Reynolds. An exquisite spinning back kick to the liver from Townsend brought an immediate end to the catch-weight bout at the 2:52 mark of round three.

Exchanges were limited over the course of the first two frames, but when they did occur, it was Townsend (5-2) who was able to counter his opponent effectively. Reynolds, meanwhile, struggled to get into striking range throughout; an outside crescent kick at the beginning of round three was his only significant offense. Reynolds (9-8) would eventually circle directly into Townsend’s decisive kick, and when heel landed on liver, his night was over.

After a back-and-forth grappling battle featuring a number of scrambles and transitions, J.P. Reese put Daniel Swain to sleep in the final frame of their featherweight bout. The end came 3:37 into round three, as Reese (12-7) gradually tightened his grip on an arm-triangle choke.

It was Swain (10-3) who threatened with multiple submission attempts in the opening round, including an arm-triangle attempt of his own, but Reese, who took the bout on short notice, was able to survive. Swain also had his foe on the defensive during a brief exchange on the feet in round two, when he attacked with hooks and right crosses. However, he was unable to hold off Reese in the final round.

Dominique Steele relied on takedowns and pressure to take a unanimous decision (30-27, 29-28, 30-27) over Ryan Thomas in a welterweight bout. Team Vision’s Steele improves to 8-4, while American Top Team’s Thomas falls to 17-8.

Early on, it was Thomas who appeared to have the advantage, as he landed a pair of takedowns, threatened with submissions and attacked with moderate ground-and-pound in the opening frame. While Thomas had his moments in the final 10 minutes -- including a knee to the face in the clinch -- Steele likely swayed the judges through positional control.