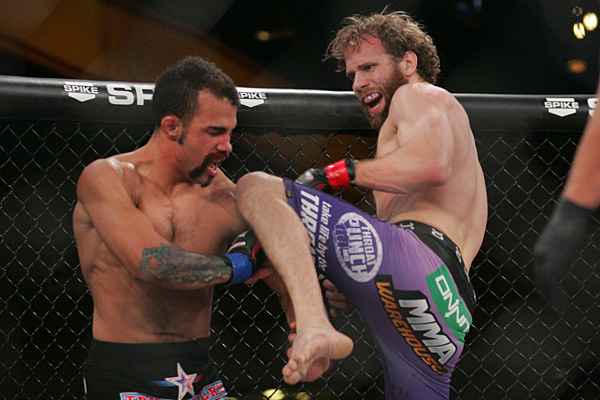 
David Rickels took the better part of a round to get rolling, but once he did, there was little Lloyd Woodard could do to stop him.

Woodard (12-3, 2-3 Bellator) was relentless in the contest’s initial five minutes, slamming his foe to the mat with a belly-to-back suplex early and remaining heavy from top position through most of the first round. After an entertaining exchange of submission attempts from both fighters, Rickels finished strong, landing some heavy ground-and-pound before the frame expired.

“The Caveman” kept the momentum going in rounds two and three, keeping the Missoula, Mont., native on his heels with an aggressive standup attack that included knees, body kicks, left hooks and uppercuts. Woodard would have his moments over the final 10 minutes, as he briefly rocked his foe with a straight right and landed a pair of takedowns. It wasn’t enough to overcome the all-out assault of Rickels, who was able to impose his will on the feet as the bout progressed. Photo: K. Mills/Sherdog.com
Brooks was quicker, faster than Tirloni.
Will Brooks (9-0, 1-0 Bellator) entered the Bellator lightweight tournament field as an intriguing but still unproven commodity. After a clear-cut unanimous decision victory over Ricardo Tirloni (15-4, 2-3 Bellator), the Illinois native established himself as a talent to watch in the promotion’s 155-pound division.

All three judges scored the bout 30-27 in favor of Brooks, who began attracting attention from the MMA community after his second-round TKO of Satoru Kitaoka at Dream 18 on New Year’s Eve.

Backed by superior strength and athleticism, Brooks was in control for the majority of the bout. The Midwest Training Center representative struck for takedowns in each frame and appeared to grow increasingly comfortable attacking with ground-and-pound from inside Tirloni’s guard. The Brazilian threatened with triangles, leg locks and a guillotine over the course of the contest, but each time Brooks was able to escape unscathed.

On the feet, Brooks displayed good footwork and movement while punishing Tirloni with a steady stream of inside low kicks and jabs.

“I don’t even know what to say right now. I’m just happy to be here. I’ve been working my butt off for this. Everybody’s just been sacrificing a lot for me to do what I do. I’m just happy to come out here and make them proud,” Brooks said. Photo: K. Mills/Sherdog.com
Awad shocked DeLorenzi with punches.
Saad Awad made the most of his short-notice opportunity.

Stepping in for Patricky Freire, who withdrew from the bout with a knee injury, Awad wasted little time in blasting through Guillame DeLorenzi, stopping his foe with a flurry of strikes just 31 seconds into the first stanza. With the win, Awad advances to the semifinals of Bellator’s Season 8 155-pound bracket.

Awad (12-4, 1-1 Bellator) attacked aggressively from the bell, and a right hand behind the ear had his Canadian opponent stumbling toward the cage. From there, the Milennia MMA product unloaded with a series of heavy left hooks until referee Jason Herzog was forced to intervene on DeLorenzi’s (10-2, 1-1 Bellator) behalf.

“I saw him get on roller skates, and I had to capitalize from there,” said Awad, who took the bout on approximately one week’s notice. “I’m the darkhorse of the tournament -- I’m coming to take it.” Photo: K. Mills/Sherdog.com
Sarnavskiy tapped out Silva.
Alexander Sarnavskiy (22-1, 2-1 Bellator) became the first lightweight tournament entrant to advance to the Bellator’s Season 8 semifinals, submitting Thiago Michel Pereira Silva (11-4, 1-2 Bellator) with a rear-naked choke at the 3:43 mark of the second stanza. It was the 12th submission victory of the 24-year-old Russian’s professional career.

Sarnavskiy sent a message in the bout’s opening 30 seconds, sending Silva tumbling to the canvas with a powerful right hand. Hard overhand rights and kicks to the body were the story throughout the first frame for “Tiger,” while Silva’s lone offense of note came from a failed guillotine choke attempt as the first round expired.

Sarnavskiy changed his focus in round two, scoring multiple takedowns while neutralizing his foe on the canvas. As Silva struggled to return to his feet, Sarnavskiy was able to his back and slide his left arm under the Brazilian’s neck, forcing his foe to ask out of the contest.