The end came 1:13 into round three, when Ruiz dropped the 6-foot-10 McGee with a right hand, followed him to the mat and forced the stoppage.

Ruiz unveiled his game plan early, as he kept his foe at bay with leg kicks. However, McGee closed the distance and brought the fight to the ground. Known for brutal elbows on the mat, McGee threw a few strikes but instead focused on Ruiz’s arm and locked in a tight kimura that had onlookers turning away and expecting the arm to snap at any moment. Ruiz’s face contorted with pain, but he survived. At the end of the round, he jumped up and appeared to have a broken nose, perhaps from one of McGee’s elbows.

After an uneventful second round, Ruiz came out and swung for the fences in the third. He caught McGee with a left-right combination and then leveled the UFC and Pride Fighting Championships veteran with the big right hand.

The show featured a bit of everything for the mixed martial arts fan, including a women’s bout and the first round of an eight-man lightweight tournament.

Steve Ramirez provided the highlight of the night, as he walked to the center of the cage and put a massive overhand right on the chin of Darvin Wattree. When Wattree woke up from his slumber, all he could do was ask, “What happened?” The official end came three seconds into the first round. 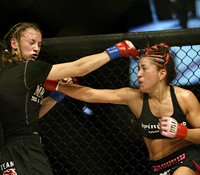 Jenkins had nothing about which to hang her head, as she dazzled in her debut and gave Frausto an amazing battle. Frausto earned a unanimous decision in a match that seemed much closer than the scorecards indicated.

In one of the lightweight tournament fights, Doug Hunt advanced with a unanimous decision victory against Joey Cabezas, as he scored with takedowns and controlled the action on the ground. Other tournament winners included Darren Crisp, Josh McCartney and Marc De La Cruz.