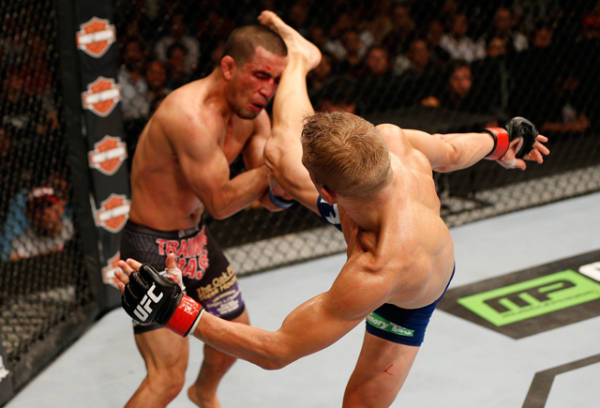 
Joe Soto found no gold at the end of his rainbow.

T.J. Dillashaw knocked out Soto with a right head kick and a straight left in the fifth round of their UFC 177 headliner, as he retained the Ultimate Fighting Championship bantamweight crown on Saturday at the Sleep Train Arena in Sacramento, Calif. Dillashaw (11-2, 8-1 UFC) closed the door on the former Bellator MMA champion 2:20 into round five.

Soto -- a short-notice replacement for Renan Barao -- kept it competitive and proved effective in spurts, especially with his counterpunching. However, he had no answer for Dillashaw’s deft footwork, merciless pace and high-volume output. Leg kicks, jabs, left crosses, tight uppercuts and short right hooks flowed from the Team Alpha Male standout’s arsenal.

Midway through the fifth round, Dillashaw staggered his game challenger with a right high kick to the temple, followed it with a straight left and trailed Soto (15-3, 0-1 UFC) to the mat for the stoppage.


Inside leg kicks, an attempted brabo choke and a hyperactive bottom game drove “The Ultimate Fighter” Season 13 winner Tony Ferguson to a split decision over Danny Castillo in the lightweight co-main event. All three cageside judges -- Michael Bell, Derek Cleary and Larry Landless -- scored it 29-28, with Bell and Cleary siding with Ferguson (16-3, 6-1 UFC).

Castillo (17-7, 7-4 UFC) assumed top position in all three rounds, but he exacted little damage with his strikes. Ferguson answered with sharp elbows and punches from his back, and he kept the Team Alpha Male mainstay guessing with a busy guard. The 30-year-old did his best work in the first round, where he lured Castillo into a standing brabo choke, dropped to the mat and neutralized him there for an extended period of time.

The 35-year-old Castillo made his move in the third round, where he again moved to a dominant position and threatened “El Cucuy” with an arm-triangle choke. A finish did not materialize, and Ferguson walked away with a split verdict, winning for the ninth time in 10 fights.

Correia (9-0, 3-0 UFC) withstood the formidable ground attack of “The Queen of Spades” for much of the first frame. In the second, she bottled up Baszler on the fence and tagged her with a pair of standing elbows, forcing her into a defensive shell. Right and left hooks upstairs and to the body came next, as referee “Big” John McCarthy moved in for a closer look. Soon after, he had seen enough.

Baszler, 34, has lost three of her past four bouts.


Carlos Diego Ferreira wiped out “The Ultimate Fighter” Season 13 finalist Ramsey Nijem with a clean right hook and follow-up hammerfists in the second round of their lightweight showcase. Ferreira (11-0, 2-0 UFC) finished it 1:53 into round two, as the onetime Legacy Fighting Championship titleholder kept his perfect professional record intact.

Nijem (9-5, 5-4 UFC) secured a takedown and scored with some mild ground-and-pound in the first round, but his inability to corral the Brazilian on the canvas proved costly. In round two, Ferreira capitalized on the Californian’s aggression. His head and chin held high, Nijem walked right into a counter right hook and dropped where he stood. Ferreira pounced for the finish, polishing off his dazed adversary with a volley of subsequent blows.


Yancy Medeiros submitted reigning Legacy Fighting Championship titleholder Damon Jackson with a reverse bulldog choke in the second round of their featured lightweight pairing. A short-notice replacement for the injured Justin Edwards, Jackson (9-1, 0-1 UFC) tapped out and then passed out 1:54 into round two.

The two lightweights traded on the feet at the start, but Medeiros (10-2, 1-2 UFC) slowly established his superiority in the clinch. The 26-year-old Hawaiian mixed in power punches to the head and body and later marked up Jackson with sharp jabs from the outside. In the second round, Medeiros trapped the Octagon MMA representative along the fence and locked in a guillotine. Jackson attempted to sit out of the technique, only to dig a deeper hole for himself. Medeiros transitioned to the bulldog choke and left “The Leech” unconscious and convulsing on the canvas.


Takedowns, ground-and-pound and an oppressive top game carried Derek Brunson to a unanimous decision over Millennia MMA’s Lorenz Larkin in an undercard battle at 185 pounds. Brunson (12-3, 3-1 UFC) swept the scorecards with identical 30-27 marks.

Larkin (14-4, 1-4 UFC) enjoyed success in the standup -- he was particularly effective with his kicks to the body -- but did not remain upright long enough to accumulate damage. A three-time All-American wrestler at the University of North Carolina at Pembroke, Brunson grounded the California-based kickboxer in all three rounds, sliced through his guard and piled up points with short punches, hammerfists and elbows. He spent much of the 15-minute encounter imposing his will on “The Monsoon.”


Former Maximum Fighting Championship titleholder Anthony Hamilton won for the seventh time in eight outings, as he stopped South African judoka Ruan Potts with second-round ground-and-pound in a preliminary heavyweight clash. Hamilton (13-3, 1-1 UFC) drew it to a close 4:17 into round two.

Potts (8-3, 0-2 UFC) was never a factor. Hamilton wore down the 36-year-old with repeated takedowns before targeting his ribcage with a series of vicious right hands in the second round. Fist met flesh over and over again, leaving visible damage to Potts’ side. When he did not respond to calls to defend himself, referee Steven Davis elected to intervene.


Onetime Ring of Combat champion Chris Wade choked Cain Carrizosa unconscious with a first-round guillotine choke in an undercard scrap at 155 pounds. Carrizosa (6-1, 0-1 UFC) blacked out 72 seconds into round one, as he fell from the ranks of the unbeaten in his Octagon debut.

Wade (8-1, 1-0 UFC) scored with a head-and-arm throw inside the first 15 seconds and set up shop in side control. From there, he caught Carrizosa in the scramble, slid the arm-in guillotine into position and waited for the Bellator MMA alum go limp.