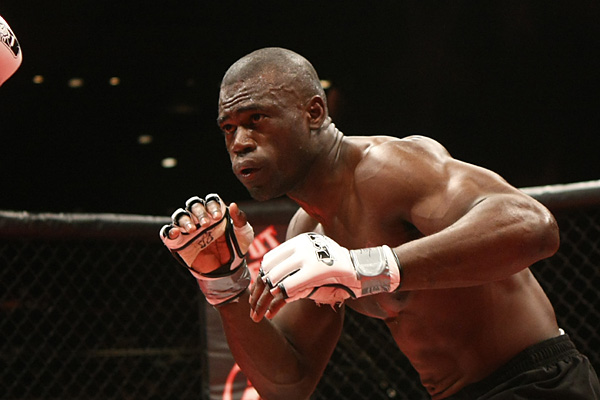 ATLANTIC CITY, N.J. -- Team Tiger Schulmann stalwart Uriah Hall captured the middleweight championship with a unanimous decision over Nodar Kuduxashvili in the Ring of Combat 41 main event on Friday at the Tropicana Resort and Casino.

After splitting the first two rounds, Hall spent the third countering the Georgian and using his superior technique to his advantage. It was enough to earn the 27-year-old a unanimous decision: 29-28 from all three judges.

“I feel like I’m more crisp down the middle throwing strikes,” Hall told Sherdog.com. “He wasn’t used to that. I noticed he was just a sambo guy: grab you, take you down and choke the s--- out of you. So I was just more, like, ‘Alright, let me play. Let me move and get some swagga in and beat him with that.’”

Hall’s teammate, Jimmie Rivera, overwhelmed Justin Hickey en route to a unanimous decision and the Ring of Combat bantamweight title. Rivera swept the scorecards by matching 30-27 counts. It was his first outing since appearing on Season 14 of “The Ultimate Fighter.”

“My whole goal was to perfect my game,” Rivera said. “I have some holes in my game that I wanted to fix -- grappling, jiu-jitsu and all that. I feel like I’ve done that.”

Meanwhile, Serra-Longo Fight Team member Ed Gordon defeated Carlos Brooks by unanimous decision -- 30-27, 30-27 and 29-28 -- for the Ring of Combat light heavyweight strap. Gordon had one goal in mind throughout the fight, as he took down Brooks in all three rounds and kept him grounded for the majority of their 15-minute battle.

“We came in knowing he had a lot of standup background,” Gordon said. “He’s a 9-0 kickboxer. We figured that [we should] go to his weakness -- his ground game. You have to give him credit because he had some good stops for the takedown. We tried to mix it up and throw him off a little bit.”

In the lone title bout not to go the distance, Guillermo Serment submitted James Jenkins with a first-round guillotine choke at 145 pounds. Serment stunned Jenkins early, as he dropped and bloodied the Serra-Longo Fight Team representative with a punch. In the subsequent scramble on the mat, Serment secured the choke for the submission 65 seconds into the match. With victory, came the Ring of Combat featherweight crown.

In other action at Ring of Combat 41:

• Brooklyn MMA’s Soslan Abanokov earned a majority decision over Tom English, with 29-28, 29-28 and 29-29 scores from the judges. Abanokov fended off rear-naked choke attempts in all three rounds;

• Long Island MMA’s Chris Wade did not have an easy time taking a unanimous decision -- 30-27, 30-27 and 29-28 -- from Villi Bello at 155 pounds. Wade had to fight off an inverted triangle choke from Bello in the second round. He survived the attempt and grounded Bello in round three to cement the decision;

• The unbeaten Liam McGeary knocked out Walter Howard with a left hook 41 seconds into the second round in his stateside debut;

• Bellmore Kickboxing Academy export Andre Harrison moved to 4-0 with a dominant victory over William Metts. Harrison brought Metts to the mat and latched on a rear-naked choke for the submission 3:27 into the opening frame;

• Marlboro, N.J., featherweight Anthony Facchini overpowered Kevin Molina for an early takedown and parlayed the position into a finish. He stopped Molina on punches 2:32 into the first round;