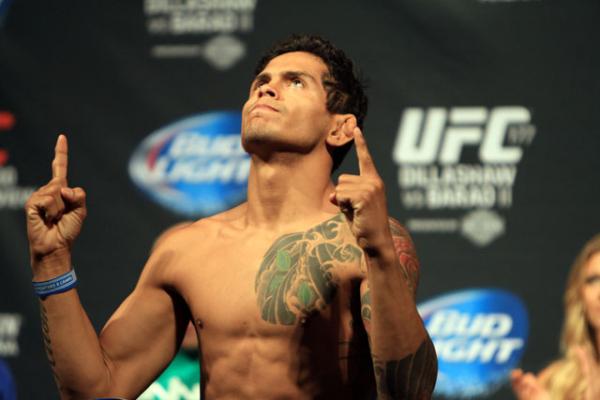 
It wasn’t the main event everyone expected, but that didn’t stop T.J. Dillashaw from putting on a show.

The bantamweight champion pocketed a $50,000 “Performance of the Night” bonus for his victory over Joe Soto in the UFC 177 main event at Sleep Train Arena in Sacramento, Calif., on Saturday night. Soto went toe-to-toe with the Team Alpha Male product for four entertaining rounds, but Dillashaw finally put the Bellator veteran away with a right head kick and straight left 2:20 into round five. Soto took the bout on one day’s notice when Renan Barao fainted during his weight cut on Friday.

Elsewhere, Carlos Diego Ferreira and Ramsey Nijem each earned a $50,000 “Fight of the Night” bonus for their lightweight scrap. While Nijem was able to take his foe down and land some ground-and-pound in the opening frame, a counter right hook from Ferreira in the second floored “The Ultimate Fighter 13” finalist. A flurry of follow-up blows sealed the win for Ferreira 1:53 into the period.

Yancy Medeiros captured the evening’s other $50,000 performance award, as he tapped out short-notice adversary Damon Jackson with a reverse bulldog choke 1:54 into the second round of their lightweight clash. The Hawaiian trapped Jackson along the fence, locked in a guillotine and then transitioned to the fight-ending maneuver when “The Leech” attempted to escape.