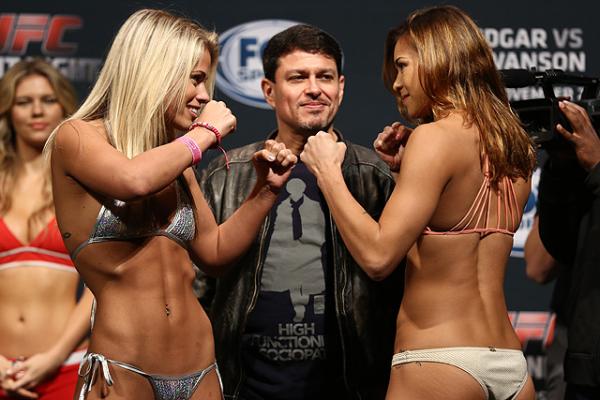 Strawweights Paige VanZant and Kailin Curran had the “Fight of the Night.” | Photo: Dave Mandel/Sherdog.com

The Fox Sports 1-broadcast show’s featherweight main event saw Edgar rout Cub Swanson with use of relentless takedowns and ground-and-pound. Edgar pocketed a “Performance of the Night” bonus for the high-stakes win, where he nabbed the latest submission in UFC history by forcing Swanson to tap out with a neck crank at 4:56 of the fifth round. After the fight, Edgar made clear that he believes he should be next in line for a rematch with 145-pound kingpin Jose Aldo, who earned a unanimous decision against “The Answer” in February 2013.

Oleinik also nabbed a “Performance of the Night” bonus by scoring the only finish of the main card in his brief heavyweight duel with Jared Rosholt. A betting underdog against the American stud wrestler, 37-year-old defied the bookmakers by earning his 11th consecutive win -- and the 50th of his career -- with a crushing knockout at 3:21 of the opening round.

Octagon debutantes VanZant and Curran shared “Fight of the Night” honors for their back-and-forth strawweight match. While VanZant dominated much of the fight with clinch work prior to earning a technical knockout at 2:54 of round three, Curran made it a fight by scoring multiple takedowns in the early going.