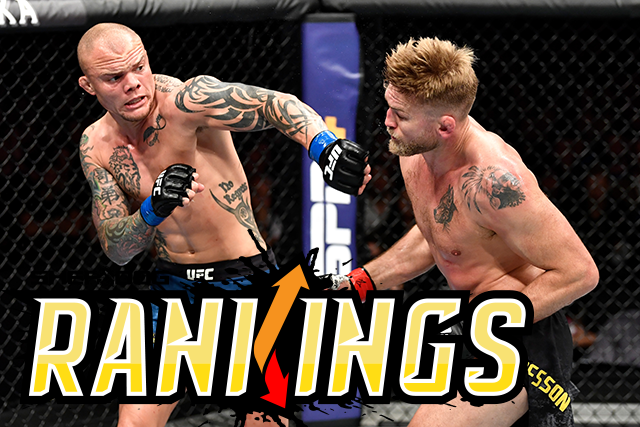 Anthony Smith made it clear at UFC Fight Night 153 that he is no flash-in-the-pan light heavyweight contender.

“Lionheart” silenced the partisan crowd at Ericsson Globe with a fourth-round submission of Swedish star Alexander Gustafsson in the evening’s main event on Saturday. Not only did Smith bounce back from a one-sided loss to reigning 205-pound king Jon Jones, but he appears to have convinced Gustafsson that retirement is his best option. Smith, who has won four of five contests since moving to light heavyweight, moves to No. 3 in our latest poll. Gustafsson, a three-time title challenger, remains in the rankings at No. 4 for the time being, though that could change once his retirement becomes more concrete.

Elsewhere, Ayaka Hamasaki retained both her atomweight title and the top spot in our rankings with a decision victory over Invicta Fighting Championships queen Jinh Yu Frey at Rizin 16 on Sunday. On that same card, 44-year-old Miyuu Yamamoto upset then No. 3 atomweight Kanna Asakura for her fourth consecutive triumph. As a result, Yamamoto enters the poll at fourth, while Asakura falls to fifth.

Back at UFC Stockholm, Aleksandar Rakic’s highlight-reel head kick knockout of Jimi Manuwa moves him to the 205-pound bubble, with plenty of potential for future upward movement. And Lina Lansberg handed Tonya Evinger her third straight loss to debut at No. 9 in the 135-pound poll. Evinger, despite her slump, is hanging on for dear life at 10th.