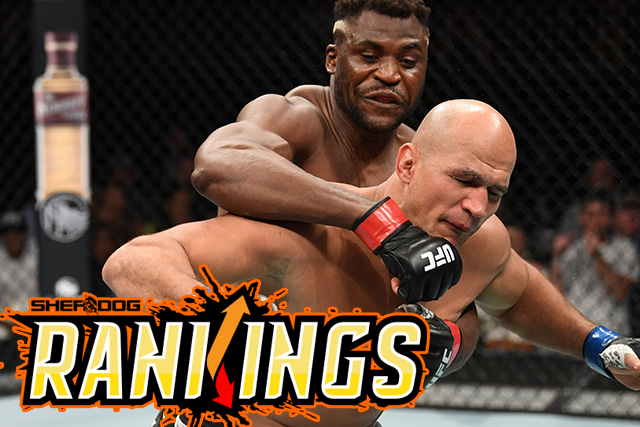 The ordering process for Ultimate Fighting Championship pay-per-views has changed: UFC 239 is only available on ESPN+ in the U.S.

UFC on ESPN 3 was a time for a pair of contenders at opposite end of the weight class spectrum to announce their respective championship candidacies.

In Saturday’s main event, Francis Ngannou dispatched Junior dos Santos via technical knockout in just 71 seconds, giving “The Predator” his third consecutive first-round stoppage. Ngannou seems like a logical choice to be next in line to face the winner of the Daniel Cormier-Stipe Miocic heavyweight title bout at UFC 241. For now, he’ll switch places with dos Santos in our rankings, moving from fourth to third.

Elsewhere, Joseph Benavidez inched closer to his third flyweight title shot with a second-round TKO of Jussier Formiga in the UFC Minneapolis co-headliner. Benavidez is certainly up there among the best fighters to never win a championship, but his status will remain in limbo until reigning titlist Henry Cejudo returns from a shoulder injury in 2020. He remains a clear No. 3 in our 125-pound poll.