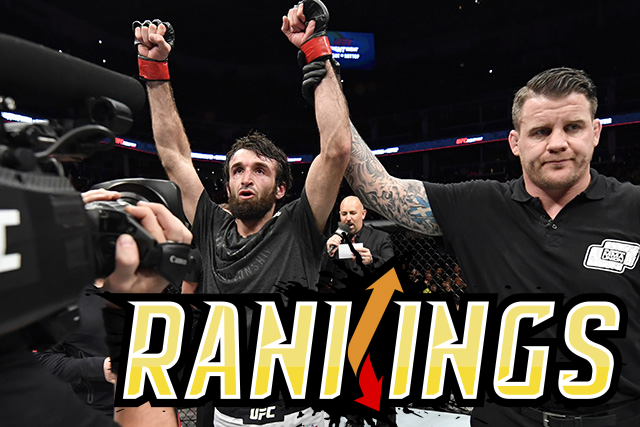 The 28-year-old Ricardo Almeida Jiu-Jitsu product earned his sixth consecutive victory within the Las Vegas-based promotion — and 14th in a row overall — on Saturday, as he held off fellow contender Calvin Kattar in the UFC Fight Night 163 headliner in Moscow. Magomedsharipov was hindered by an infection and faded a little in the third frame, but there is little doubt that he ranks among the most interesting contenders at 145 pounds. Whether he gets a shot at the Max Holloway-Alexander Volkanovski winner next remains to be seen, but for now, the rising star moves up one spot to sixth in our latest featherweight poll.

Elsewhere, Alexander Volkov put together a conservative-yet-effective performance in the UFC Moscow co-main event, as he outpointed short-notice foe Greg Hardy. Volkov, who was originally supposed to face Junior dos Santos in the evening’s headliner, seemed content to pick his adversary apart with straight punches and kicks at range for his seventh victory in his last eight pro appearances. A win over dos Santos would’ve been cause for movement, but for now Volkov stays put at No. 7 in the heavyweight rankings.

Meanwhile, Arlene Blencowe continues to compile a solid 145-pound resume, as she took a clear unanimous verdict over UFC veteran Leslie Smith at Bellator 233. “Angerfist” has won six of her last seven bouts and remains entrenched at No. 4 in the women’s featherweight poll. Also at featherweight, we bid adieu to Holly Holm, whose last 145-pound appearance came in a decision win over Megan Anderson in June 2018.