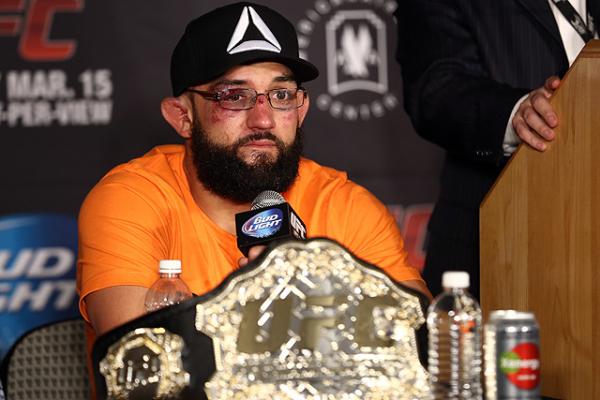 A new era has dawned in the welterweight division.

Johny Hendricks captured the vacant welterweight title with a scintillating five-round verdict over Robbie Lawler in the UFC 171 headliner. The former NCAA national champion wrestler displayed a diversified arsenal in victory, as he relied on a high-volume striking attack that included punching combinations, as well as leg kicks and knees. The win did not come without adversity. Lawler had “Bigg Rigg” reeling in the third and fourth frames. The American Top Team product staggered Hendricks with a left hook in round three and opened a gash near his right eye with punches in round four. Had he been able to maintain his assault for just a little longer, the strap might have been his.

However, it was Hendricks who clinched the win with a late surge in the closing stanza, ending with a takedown in the bout’s final moments. Now established as the alpha dog at 170 pounds, the Team Takedown representative will not be lacking for challengers in the coming months. At the forefront of that list are UFC 171 standouts Tyron Woodley, who stopped Carlos Condit in the co-main event, and Hector Lombard, who manhandled Jake Shields in another pivotal welterweight clash.

Elsewhere, Alexander Gustafsson cemented his status as the world's No. 2 light heavyweight with a dominant showing at UFC Fight Night 38, where he knocked out imposing British slugger Jimi Manuwa in the second frame. Meanwhile, Jessica Andrade enters the women’s bantamweight rankings on the strength of a win over Raquel Pennington, while Justin Scoggins cracks the flyweight poll after two straight impressive showings.