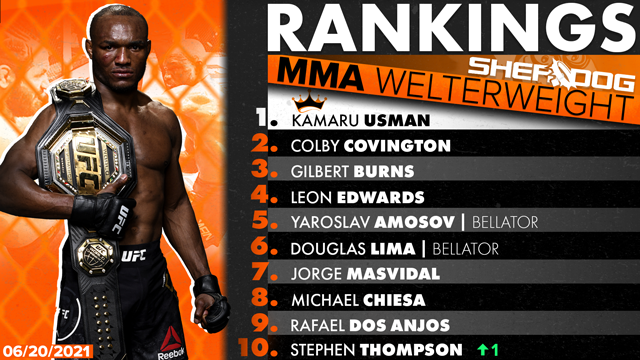 Covington settled the score with Tyron Woodley in decisive fashion at UFC Fight Night 178, dominating his former American Top Team stablemate for the majority of the bout before a rib injury forced Woodley to cry uncle at the 1:19 mark of Round 5. “Chaos” appears to be back on track after coming up short in a 170-pound title bout against Kamaru Usman at UFC 245 in December and remains one of the top contenders in the division. Another title shot could be next for Covington.

Burns appeared to be on the verge of scoring an upset in the UFC 258 headliner when he rocked Kamaru Usman with an overhand right early in their welterweight championship encounter. Unfortunately for the Brazilian, Usman recovered and gradually took control thanks in large part to a powerful jab. Ultimately, Burns succumbed to his former training partner via technical knockout 34 seconds into the third round, bringing an end to his six-fight winning streak. Burns will jump back into the welterweight fray against former No. 1 contender Stephen Thompson at UFC 264.

Edwards scored his first victory since July 2019 with a convincing five-round verdict over fan favorite Nate Diaz in a five-round, non-title affair at UFC 263. The Englishman’s well-rounded attack kept Diaz off balance for four rounds, but he had to survive a scare after being wobbled by a left hand in the final frame. Edwards is unbeaten in his last 10 welterweight appearances and has a solid claim to a welterweight title shot, though he may have to wait until Colby Covington gets his rematch with Kamaru Usman first.

Amosov gave Ukraine its first MMA champion with an impressive performance against Douglas Lima in the Bellator 260 main event on June 11. The combat sambo champion held his own with Lima on the feet and grounded the Brazilian in every round to win a unanimous decision and claim the 170-pound throne. The 27-year-old Amosov’s sparkling undefeated record includes seven triumphs under the Bellator MMA banner.

Lima had no answers for Yaroslav Amosov in the Bellator 260 headliner, as he relinquished the welterweight crown in a five-round decision defeat at Mohegan Sun Arena in Uncasville, Conn., on June 11. Lima was unable to use his standup to combat his opponent’s wrestling, and he was grounded in all five rounds of their clash. Lima, who is on a two-bout skid after falling to Gegard Mousasi in a middleweight championship clash last October, has lost and regained the 170-pound strap on two previous occasions during his Bellator tenure — so a return to the top of the division is not out of the question.

Even with a full camp behind him, Masvidal was no match for Kamaru Usman at UFC 261, as he fell via-second round knockout in the evening’s main event at Vystar Veteran’s Memorial Arena in Jacksonville, Florida. After back-to-back losses to Usman – the other being a five-round verdict at UFC 251 – Masvidal’s days as a top contender at 170 pounds appear to be in the rearview until a new champion is crowned. However, given his name value and marketability, other interesting fights could await the “BMF” champion.

Chiesa passed another significant test in his welterweight journey, as he went five full rounds for the first time in his career in a unanimous decision triumph over Neil Magny in the UFC on ESPN 20 main event. “Maverick” relied on a dominant grappling game to overwhelm Magny and improve to 4-0 since moving up to 170 pounds. “The Ultimate Fighter 15” winner will next square off against finishing machine Vicente Luque at UFC 265.

In his first lightweight bout in more than four years, dos Anjos showed that he’s ready to contend at 155 pounds again when he dispatched Paul Felder in the UFC Fight Night 182 headliner on Nov. 14. The 36-year-old Brazilian was coming off a stint at 170 pounds in which he had lost four of his previous five Octagon appearances, but it appears that he is ready to make another run at championship gold in the division he once ruled.

After a difficult stretch in which he won just one of five UFC appearances from November 2016 to March 2019, Thompson has righted the ship in recent outings. “Wonderboy” returned to relevance with back-to-back decision wins over up-and-coming contenders Vicente Luque and Geoff Neal in his last two bouts, and the 38-year-old karateka remains a popular callout target for much of the welterweight division. Another victory or two could propel Thompson into a third 170-pound title shot. He’ll get to take a significant step toward that goal when he faces recent title challenger Gilbert Burns at UFC 264.