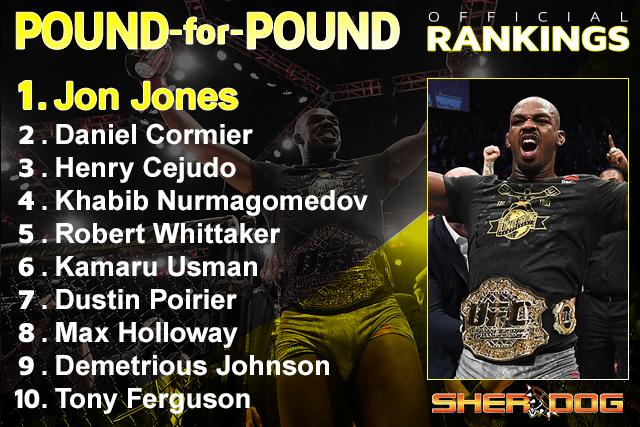 Henry Cejudo is assembling quite the résumé in the Ultimate Fighting Championship.

The Olympic gold medalist became just the fourth simultaneous two-division champion in promotion history after defeating Marlon Moraes via third-round technical knockout in the UFC 238 headliner this past Saturday night. With victories over Demetrious Johnson, the man once considered to be among the top pound-for-pound fighters in the world and Dillashaw and Moraes, two bantamweights, Cejudo has the juice to move past reigning lightweight champion Khabib Nurmagomedov and into the third position in our latest poll. For many of our team, Cejudo’s recent stretch of Moraes-Dillashaw-Johnson trumps Nurmagomedov’s McGregor-Iaquinta-Barboza run.

Meanwhile, Tony Ferguson joins the Top 10 after earning his 12th consecutive victory with a second-round stoppage of Donald Cerrone in another featured bout at UFC 238. “El Cucuy” has overcome injury and personal issues to post back-to-back impressive triumphs over Anthony Pettis and Cerrone since October. Many believe the former interim champion is the rightful No. 1 contender at lightweight, and he just may get his shot if Dustin Poirier can’t get the job done at UFC 242.

It wasn’t his most thrilling triumph to date, but Jones maintained his spot atop the division with relative ease thanks to a suspenseless five-round drubbing of Anthony Smith in the UFC 235 headliner. While potentially attractive opponents await at heavyweight, “Bones” seems more interested in clearing out the competition at 205 pounds. Jones, who is unbeaten in his last 16 outings, will continue to try and work his way through the division when he meets Thiago Santos in the UFC 239 headliner on July 6.

After a shaky first round, Cejudo turned up the heat on Marlon Moraes in the UFC 238 main event, winning via third-round technical knockout to become the fourth simultaneous two-division champion in the history of the Las Vegas-based promotion. It’s difficult to deny the Olympic gold medalist as one of the sport’s pound-for-pound best given recent wins over Demetrious Johnson, T.J. Dillashaw and Moraes. “The Messenger” plans on defending on both his flyweight and bantamweight belts – and he even has designs on making an eventual move to 145 pounds..

Post-fight shenanigans aside, Nurmagomedov was in prime form against Conor McGregor at UFC 229. He completed takedowns, applied heavy top pressure and generally made life difficult for the knockout-minded Irishman at every turn. “The Eagle” even survived adversity — he lost a round for the first time in his promotional tenure — before tapping McGregor with a neck crank at the 3:03 mark of round four. Nurmagomedov received a nine-month suspension — which can be reduced to six with the production of an anti-bullying PSA — and a $500,000 fine for his role in the post-fight brawl that occurred after the bout. The Dagestani will next defend his title against interim king Dustin Poirier at UFC 242 on Sept. 7.

An emergency hernia surgery forced Whittaker to withdraw from his scheduled title defense against Kelvin Gastelum at UFC 234. Even more disappointing, that’s twice that “The Reaper” has been forced to pull out of headlining championship fights in his home country of Australia (An injury also forced him out of a proposed matchup with Luke Rockhold at UFC 221.) Whittaker has won nine bouts in a row but is still awaiting his first official belt defense, as his UFC 225 triumph over Yoel Romero was a non-title bout due to Romero missing weight.

Even those who predicted victory for Usman couldn’t have imagined “The Nigerian Nightmare” being as dominant as he was against Tyron Woodley at UFC 235. Usman claimed the welterweight throne on the strength of five dominant rounds against Woodley, overwhelming his opponent with wrestling, clinch work and top control. In fact, Usman probably deserved more 10-8 scorecards than he received. Nonetheless, Usman has hardware for his trophy case and an ongoing 10-fight winning streak. Former interim champ Colby Covington is likely next on his agenda.

It took him 22 fights to get there, but Poirier is finally a UFC champion. “The Diamond” went five hard rounds with featherweight king Max Holloway, relying on his power to pull out a unanimous decision triumph in the UFC 236 headliner. Poirier has lost just once in 11 bouts since moving up to lightweight, compiling a resume that includes victories over the likes of Holloway, Eddie Alvarez, Justin Gaethje and Anthony Pettis, to name a few. That path doesn’t get any easier for the American Top Team product, as he now has a title unification bout with Khabib Nurmagomedov officially set for UFC 242 Abu Dhabi..

For the first time in a long time, Holloway simply couldn’t wear down an opponent. The reigning featherweight king was very competitive in his first lightweight foray at UFC 236, but it was ultimately the power of Dustin Poirier that won the day — and interim 155-pound gold — in Atlanta. The decision defeat brings an end to a remarkable 13-bout winning streak for “Blessed,” who will look to rebound with a successful featherweight title defense against Frankie Edgar at UFC 240 on July 27.

Johnson kicked off his One Championship tenure with a second-round submission of Yuya Wakamatsu in the opening round of the promotion’s flyweight grand prix. “Mighty Mouse” survived a game effort from his unheralded opponent before locking in a power guillotine choke at the 2:40 mark of the second round at One “A New Era” on March 31. A closely contested split-decision setback against Henry Cejudo in his final UFC appearance is Johnson’s only loss since 2011, and the AMC Pankration product figures to have a good opportunity continue to pad his record against lesser competition in his new home.

It wasn’t necessarily the ending he envisioned, but Ferguson appeared to be well on his way to defeating Donald Cerrone at UFC 238 before the contest was halted prior to round three due to “Cowboy’s” swollen eye. Cerrone certainly got his shots in, but “El Cucuy” utilized his usual multi-faceted offensive approach to land more than 50 significant strikes in both the first and second rounds. With 12 consecutive wins under his belt, there is no more deserving No. 1 contender at lightweight than Ferguson. Merit doesn’t always win out in the modern UFC era, however.