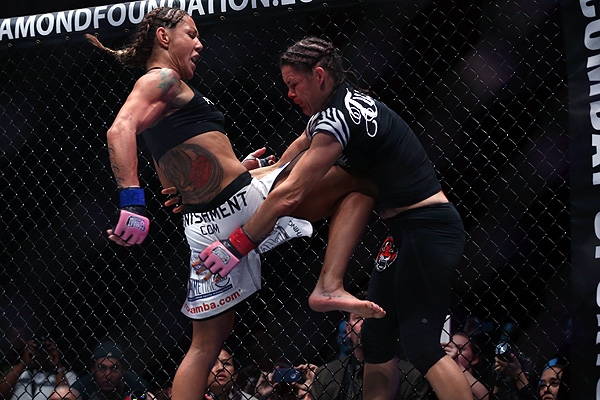 With two world championships on the line, Invicta 5 carried a lot of hype.

Michelle Waterson defied the odds, surviving some vicious ground-and-pound, successfully defending a Jessica Pene armbar in the third round and returning with one of her own in the fourth, snatching the atomweight title from the top-ranked fighter in the division -- defeating a grappling whiz at her own game.

Also of note was a back-and-forth war between Sarah Kaufman and Leslie Smith, Rose Namajunas’ record-breaking 12-second flying armbar on the undercard, and a knockout of the night by Miriam Nakamoto, who defeated Jessamyn Duke in just 2:20. There was Bec Hyatt’s grudge match versus Jasminka Cive, ending with an armbar win by the Australian. And Zoila Gurgel’s rather unceremonious Invicta debut after a difficult relationship with Bellator. But by far what attracted the most attention on April 5 was the return of Cristiane “Cyborg” Justino.

The Brazilian powerhouse racked up an astounding 10 consecutive wins before her bout with Hiroko Yamanaka (which would’ve been number 11) was overturned by the CSAC due to testing positive for the anabolic steroid stanozolol. Speculation of PEDs had begun to surface long before, even prior to Cyborg defeating media darling Gina Carano for the women’s featherweight title on Aug. 15, 2009.

After a year-long suspension and $2,500 fine (and with Invicta Fighting Championships instituting PED testing), all eyes were on Cyborg to see how she’d fare following a 16-month layoff. And when Cyborg’s first scheduled opponent, Ediane Gomes, pulled out of the fight with an injury, Fiona Muxlow came in as a late replacement.

The fight wasn’t even close. After dropping the Australian with a right cross, Cyborg landed heavy punches, ending the mauling with a series of hooks and knees until referee “Big” John McCarthy had seen enough.

Who’s next for Cyborg? This victory paves the way for a rematch with Marloes Coenen, which will take place at Invicta 6.

If Cyborg can get by the very skilled Coenen, perhaps Ediane Gomes or Julia Budd will get the next shot. These potential opponents notwithstanding, it’s hard not to view a very dominant Cyborg -- who not only scores victory after victory but also utterly demolishes her opponents -- as a step above the rest of the women in the division.

And yet the most marketable bout to date -- the one that seems destined not to take place -- would put a rest to her ongoing rivalry with UFC women’s bantamweight champ Ronda Rousey.

Rousey -- who began calling out Cyborg as an amateur before dropping down to bantamweight and taking the world of women’s MMA by storm -- insists the fight take place at 135, and with Cyborg’s suspension came the dissolution of Zuffa’s 145-lb. division.

The judo Olympic silver medalist has her hands full with the upcoming season of TUF, followed by a match against the winner of Meisha Tate vs. Cat Zingano. Many of her victims are vying for a rematch, and both Sara McMann and Alexis Davis also are lining up for a shot.

With Invicta Fighting Championships promising 4 fight cards a year,that may not be enough time to build up potential contenders for the belt (or any that stand a chance against Justino). And if Cyborg does indeed continue her streak in Invicta, and Rousey continues to dominate in the UFC, an unholy mess could be brewing. Although agreeing on which weight the bout will be contested seems to be a point of contention, perhaps it’s only a matter of time.