With October’s top fights -- like Jake Shields vs. Paul Daley and Sean Sherk vs. Tyson Griffin -- in the books, the time has come to look forward to what the month of November has to offer in terms of quality mixed martial arts matchups.

Traditionally, the year’s penultimate month is a bit slow, as the best fighters are held back for the big year-end shows in Japan and Las Vegas; this year’s no different. Nevertheless, Sherdog.com has compiled a list of 10 tussles fans should not miss.

Plenty of smack talk leads into this clash between two UK light heavyweights. Hybrid Fight Team’s Sutherland has amused the UK MMA scene for the last couple of months by claiming he’s the number one 205-pound fighter in the country. Now he has the chance to back up those bold words, as he takes on Thompson, an undefeated ground-and-pound machine from the seaport town of Whitehaven in Northern England. 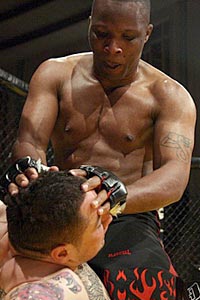 Jim Page/Sherdog.com
Denniston Sutherland (top)
will clash with the undefeated
Kevin Thompson.
Rodriguez made himself a laughing stock of the MMA world when he lost to Beraun, a totally unheralded striker, at RITC 78 in January 2006. Although three years removed from his prime, Rodriguez’s loss to the Arizona heavyweight came as a major surprise to anyone following the former UFC champion’s career. Now, almost three years later, Rodriguez has a chance to redeem himself, as he gets a second crack at Beraun, a man coming off back-to-back losses against UFC veterans Mike Whitehead and Wade Shipp.

A late addition to the Glory 10 card that features the heavyweight bout between Alistair Overeem and Gary Goodridge, Jocz will lock horns with Njie, a Gambian submission specialist and professional boxer. A superbly rounded Pole, Jocz has recently signed a contract with Japanese promotion Sengoku and could be a candidate for its Jan. 4 show, should he make it past the extremely tough and durable Njie. It’s a true European super fight in the East of Holland. 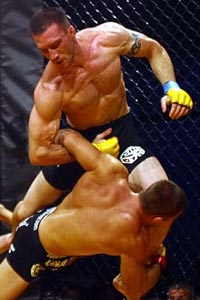 Despite a 22-month layoff from a career-threatening back injury, likeable middleweight Quarry has made an impressive comeback, knocking out Pete Sell and winning a one-sided decision over Canadian Kalib Starnes in back-to-back fights. Now, the 36-year-old is pitted against Maia, a reigning Abu Dhabi Combat Club submission wrestling world champion and the best pure jiu-jitsu player in the UFC. The last time Quarry faced a Brazilian jiu-jitsu black belt from Brazil, he suffered a unanimous decision loss. How will he fare this time?

The main event at Cage Gladiators X will feature giant Dutch champion Struve, in the first defense of his heavyweight title, against incredibly experienced Brazilian Neto. Struve -- a 20-year-old, 6-foot-8, 235-pound prospect out of Team Schrijber -- has been busy the past two years, fighting a total of 12 times (11 wins). Neto, the head BJJ coach at the prestigious Wolfslair Academy, has not fought since he was victimized by a second-round knockout against Eddie Sanchez in September 2006.