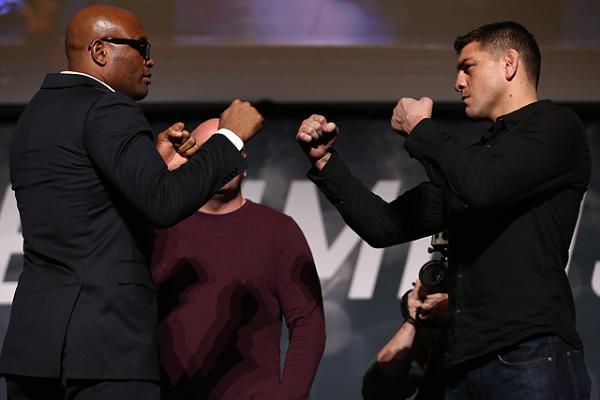 
The Ultimate Fighting Championship’s second pay-per-view event in January offers a lineup stacked with fantastic scraps from top to bottom. This is one of the best cards the promotion has offered in the last year, a confection of star power and intriguing matchups between lesser names.

In the main event, Nick Diaz’s wish to fight “a hitter, not a holder” is fulfilled, as he gets perhaps the best “hitter” of all-time in the great Anderson Silva. What this fight means in the grand schemes of the welterweight and middleweight divisions is unclear, but it is hard not to get excited about a meeting between two of the sport’s most compelling personalities. Underneath the headliner, rising talent Kelvin Gastelum gets the chance to prove he belongs at the top against Tyron Woodley, while Joe Lauzon-Al Iaquinta and Thiago Alves-Jordan Mein should bring slick action to the main card.

Let us take a look at each matchup UFC 183, set for Saturday at the MGM Grand Garden Arena in Las Vegas. 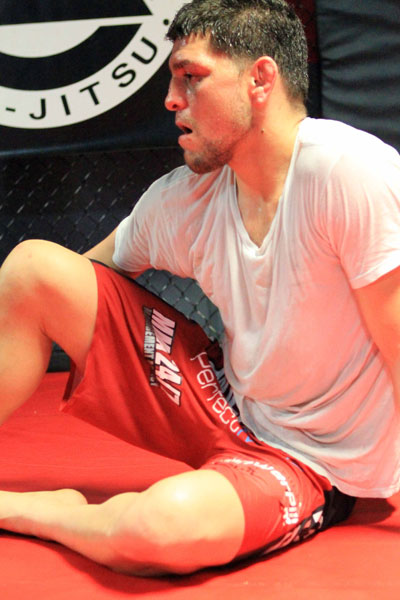 Photo: Jeff Sherwood/Sherdog.com
Diaz last fought in 2013.
THE MATCHUP: Silva, the longtime middleweight champion and a strong contender to carry the greatest of all-time mantle, returns to action following the horrifying broken leg that kept him out of action for more than a year. He draws the enigmatic, one-of-a-kind Diaz, who has not fought since dropping a five-round decision to then-welterweight kingpin Georges St. Pierre nearly two years ago.

Silva is the greatest striker in the sport’s history and probably its purest counter fighter, with an unparalleled sense of timing, range and exceptionally efficient circular movement. He dislikes leading and only does so if his opponent refuses to oblige him and throw, but when Silva chooses to move forward, he works behind a crisp straight left and snapping low kicks as he circles and darts. When he really wants to go on the attack, he mixes in a sneaky back-leg high kick that plays off his cross, but such unbridled aggression is a rare occurrence. He feints constantly, and once an opponent begins to react with single shots, Silva really goes to work, slipping his head off the centerline and returning with perfectly timed jabs, hooks, crosses, knees and kicks in a bewildering variety of counters.

As good as he is at range, Silva is even better in the clinch. He is a master of controlling his opponent’s posture with single- and double-collar ties, and he excels at finding narrow openings through which to fire sharp knees. Vicious punches and elbows are staples of his inside game, and he owns an arsenal of trips and dumps that create opportunities for fight-ending offense. The Brazilian’s much-maligned takedown defense is more than serviceable, but even from his back, he is capable of locking up quick submissions and throwing damaging strikes. In short, Silva is exceptionally dangerous from any position, and even when considering his cracked chin and lessened physical gifts, he can finish the fight at any time.

Diaz, on the other hand, is a born-and-bred pressure fighter. He wears down his opponents with his ability to absorb damage, constant output and work to the body. The problems with his boxing-based, linear approach should be clear by this point: Diaz struggles to cut off his opponents’ angles, does not check low kicks and has relatively little to offer in the center of the cage, all of which a disciplined foe can exploit. When he backs his opponent to the fence, however, Diaz shines. He unleashes combinations of up to 16 punches, alternating between head and body in a stream of constant, punishing offense. He does a beautiful job of changing up his rhythm, tapping away with low-powered shots before whipping a full-speed left that catches his opponent unawares.

The Stockton, Calif., product is a criminally underrated clinch fighter. He is surprisingly strong and skilled, with a firm understanding of posture and balance, and brings the same continuous barrage of offense to his inside game that he shows in his boxing. His takedown defense is likewise better than it is often thought to be, and from his back, Diaz is capable of submitting all but the strongest top-control specialists, although technical wrestlers can shut down his kneebar and kimura escapes with a solid top-ride. In every phase, Diaz works at a tireless pace and is seemingly immune to damage, though with a long career under his belt, one has to wonder how long that will last.

THE PICK: While the betting odds capture the difficulty of the matchup for Diaz, there are so many X-factors and unknown variables here that it is almost impossible to predict how the fight will go. Both fighters are coming off long layoffs: Diaz has not fought in 22 months, and Silva is dealing with the psychological and physical impact of a serious leg injury, along with the consistent drop down the aging curve. Diaz is no spring chicken himself, either. There are a number of potential outcomes here. First, Silva might keep the fight in the middle of the cage and work over Diaz with low kicks and circular movement to take a clear, boring decision over a frustrated opponent. Second, Silva could engage on the inside, where his size, strength and god-like technical prowess in the clinch come into play. Third, Silva might embrace his inner showman, throw caution to the wind and engage in a straight-up firefight. While the first option makes the most sense, I think the fight will consist of some measure of all three, with Silva clearly taking the first three or four rounds and Diaz turning it up late. Silva by 49-46 decision is the pick.