It may have looked predictable on paper, but the latest fight involving pound-for-pound king Anderson Silva ended up producing several twists, as well as a surprising amount of negativity toward the dominant middleweight champion. Silva baffled some and annoyed others in his fight against Patrick Cote atop UFC 90 on Oct. 25, implementing a style that flaunted his superiority.

Silva made several Kung Fu-esque hand motions and other puzzling gestures before Cote went down with a serious knee injury in the third round. Silva did not live up to his billing as a dismantler, picking his shots sparingly and never quite blitzing for the kill, though Cote absorbed heavy shots that landed flush. Cote collapsed shortly into the third after aggravating a pre-existing meniscus injury, and Silva was awarded the anti-climactic victory by technical knockout.

Several prominent mixed martial arts writers and even UFC President Dana White called into question the performance, a backlash that so peeved Silva that, according to White, he demanded to fight again immediately. The UK magazine Fighters Only reported Silva will likely be on the UFC’s next card in London, set for February, though White said Silva was ready to go as soon as UFC 91 in two weeks.

Cote became the first person to take Silva to a third round in the UFC, a fact he himself stressed in several interviews. His knee injury will require surgery and keep him out of action for six to eight months, which makes it unlikely Silva’s next title defense will be a rematch with the Canadian. Cote’s manager, Stephane Patry, told The Canadian Press that he suffered the meniscus injury while training for a fight against Drew McFedries in January and re-aggravated it preparing for Silva. A doctor had urged surgery, but Cote opted for a cortisone shot so he could fight Silva.

For his part, Silva told Sherdog.com that his uncharacteristic antics in the fight were meant to induce Cote into making a mistake in the later rounds. He apologized at the UFC 90 post-fight press conference for not delivering a more forceful fight.

The result was a deflating end to a strong pay-per-view offering, as the UFC made its debut in the Chicago market at the Allstate Arena in Rosemont, Ill. The 15,359 fans on hand translated into a $2.8 million take at the gate, a record for the venue that surpassed a mark set by a World Wrestling Entertainment “Wrestlemania” in 2006.

Though the number of pay-per-view buys will not be clear for several weeks, the show was the strongest test to date for whether or not Silva has reached an echelon as a drawing card that approaches his echelon as a fighter. The Spike TV “Countdown to UFC 90” preview drew 796,000 viewers, according to MMA Payout, thought to be the highest rating in the history of a series that premiered in 2005 and has hyped every UFC pay-per-view since. Silva’s ability to draw buys would not only benefit the UFC but also Silva himself, as he receives a contractual percentage of that revenue on shows he headlines, according to the Wrestling Observer.

Regardless of whether Silva broke out as a top draw at UFC 90, several fighters took it upon themselves to break out in rankings for their respective weight classes. 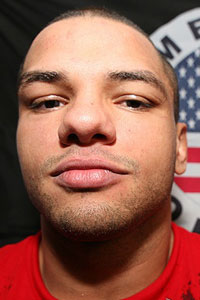 Dave Mandel/Sherdog.com
Thiago Alves' stock
continues to rise.
Thiago Alves put on a clinic against Josh Koscheck, shutting down all of the elite wrestler’s takedown attempts and working leg kicks that battered his opponent, a late replacement for Diego Sanchez. The American Top Team ace made as convincing a case as possible for a welterweight title shot, even impressing champion Georges St. Pierre. With St. Pierre set to face B.J. Penn in January, it remains unclear when a title opportunity might present itself.

At lightweight, Sean Sherk proved he’s still in contention, as he defeated fellow wrestler Tyson Griffin by unanimous decision. The fight played out almost entirely on the feet and featured several fits of crisp striking. Sherk and Griffin collected $65,000 “Fight of the Night” bonuses for their efforts. Sherk said afterward that he wants the winner of the Nov. 15 fight between Kenny Florian and Joe Stevenson.

Elsewhere, Spencer Fisher worked a diligent triangle to put away Shannon Gugerty in the third round and take the “Submission of the Night” bonus. Gray Maynard battled the active ground game of Rich Clementi -- and boos from a restless crowd -- as he took a unanimous decision. Also picking up wins were Dan Miller -- who improved to 2-0 in the UFC by outpointing a very game Matt Horwich -- and Thales Leites, who had no trouble with late replacement Drew McFedries, submitting him briskly with a rear naked choke in the first round.