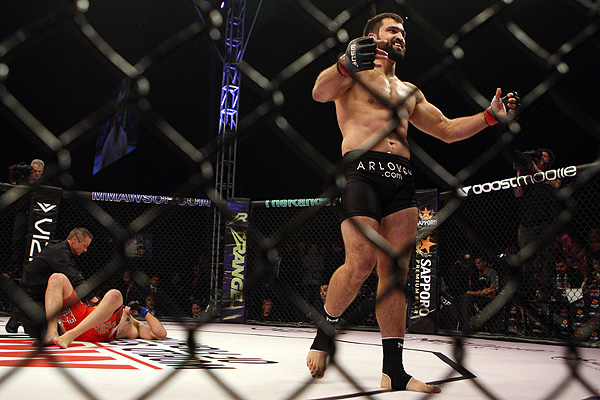 
With one event in the books, the World Series of Fighting looks to move onward and upward in 2013. It looks promising thus far: Ray Sefo’s organization inked a three-year deal with the NBC Sports Network earlier this year and has been busy acquiring a stable of well-known talent, most notably former Ultimate Fighting Championship welterweight contender Jon Fitch.

World Series of Fighting 2 on Saturday will attempt to build on the narrative of its inaugural offering by pitting the winners of its main and co-main events against one another, as Andrei Arlovski meets Anthony Johnson at the Revel Resort and Casino in Atlantic City, N.J. The card also features an intriguing bantamweight clash between up-and-coming talents Marlon Moraes and Tyson Nam.

Here is a closer look at the WSOF 2 “Arlovski vs. Johnson” card, with analysis and picks:

File Photo
Johnson has won four straight.
The Matchup: Two of the World Series of Fighting’s most prominent acquisitions -- and biggest winners from WSOF 1 -- square off here, with Johnson’s transition from massive welterweight to heavyweight finally complete.

“Rumble” demonstrated that his knockout power carried over to 205 pounds just fine at WSOF 1, surviving an apparent eye poke from D.J. Linderman to score a first-round knockout over the former Cage Warriors Fighting Championship heavyweight king. It was Johnson’s third straight victory at light heavyweight, and it has to be a confidence boost knowing he was able to knock out an opponent who had previously competed at heavyweight. Johnson was often depleted from trying to make 170- and 185-pound limits earlier in his career. The Blackzilians member has said he has cut from as much as 220 pounds in the past, so it will be interesting to see how he performs without having to endure any type of cut whatsoever.

Meanwhile, Arlovski has come a long way since contemplating retirement following a knockout loss to Sergei Kharitonov at Strikeforce “Fedor vs. Silva” in February 2011. “The Pit Bull” is unbeaten in five bouts since then, including a first-round stoppage of Devin Cole in the WSOF 1 headliner. Cole was no match for Arlovski in the standup, as the Belarusian landed crisp punches throughout the short-lived affair before sending his foe to the canvas with a straight right hand. Arlovski sealed the victory with a series of follow-up hammerfists on the ground.

Arlovski, who once flirted with a professional boxing career, is a good athlete who understands how to use movement and angles in his striking. He is more technical than most heavyweights, but even during his current run, Arlovski has sometimes been hesitant to pull the trigger. When he fights assertively, Arlovski is capable of landing solid combinations and occasionally flashes the knockout power that once made him a UFC heavyweight champion. In his most recent outing, the Jackson’s Mixed Martial Arts product scored a unanimous decision over Mike Hayes at Fight Nights “Battle of Moscow 9.”

Despite his resurgence, devastating knockout losses to the likes of Kharitonov, Brett Rogers and Fedor Emelianenko mean Arlovski will continue to be dogged by questions about his chin for the remainder of his career. Although he is not a natural heavyweight, Johnson might be able to test Arlovski in this area more than his previous five opponents.

Arlovski’s usual speed advantage figures to be negated by Johnson, a talented if inconsistent athlete. The 29-year-old has finished 10 of his 14 victories by knockout or technical knockout and will attack with power punches and head kicks. Against smaller opponents, “Rumble” was also able to land takedowns and work ground-and-pound. It might be difficult for Johnson to use that approach here. Although Arlovski is not a huge heavyweight, his sambo background usually gives him the ability to keep his fights standing. The Belarusian mixed in a few takedowns in his win over Hayes, so do not be surprised if he attempts to do the same against Johnson.

The Pick: Arlovski might not be what he once was, but he is a significant step up from Linderman. Johnson has the power to finish the “The Pit Bull” if he lands something significant, but Arlovski is the more technical striker and has received something of a bum rap for his past knockout losses to heavy-handed foes. Arlovski takes this by technical knockout in round two or three.