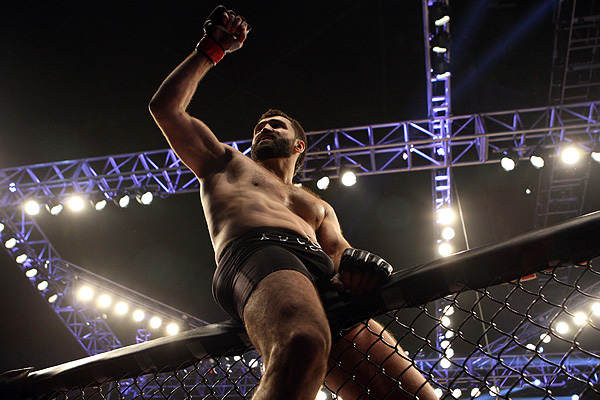 Independent promoters are at it again, too, bringing us intriguing clashes, legitimate heavyweight battles and captivating matchups between prospects. Our monthly “Tussles” feature -- which takes readers around the globe in an effort to broaden their MMA horizons and showcase the best fights and fighters that might not draw much attention otherwise -- turns its attention there, as 2012 draws to a close.


Advertisement
As always, the list does not focus on the well-promoted main event bouts from major organizations you already know to watch, but rather on fights from all over the planet that are worth seeing. UFC, Strikeforce and Bellator events are excluded by design.

Moscow’s Fight Nights promotion is quickly gaining prominence as an organization from which to expect big things in the future. Already boasting the likes of Bellator-signed Vitaly Minakov and Murad Machaev, the company has spilled some more cash to bring in former UFC heavyweight champion Arlovski. “The Pit Bull” will face former Cage Warriors Fighting Championship titleholder Hayes.

This is business as usual for Polish powerhouse promotion KSW. It spent weeks pushing the fight between company centerpiece Khalidov and Melvin Manhoef, only to see the Dutch juggernaut withdraw from the KSW 21 headliner with an injury. “The Ultimate Fighter” Season 3 winner Grove will take Manhoef’s place on a week’s notice for what will be his sixth fight of 2012.

Russia and Brazil have taken turns as dominant heavyweight powers in the sport for decades, from Fedor Emelianenko to Antonio Rodrigo Nogueira. Before those two, there was Magomedkhan Gamzatkhanov, better known as “Volk Han.” Unfortunately, few of today’s fans had the pleasure of seeing the lanky grappler compete in his prime in the mid-1990s. He was beloved by Japanese fans until his retirement in 2001. Now, the 51-year-old Gamzatkhanov will travel to the Land of the Rising Sun for one final battle against Pancrase legend Funaki.

Bellator veterans Arocho and Roberts will square off in the main event of VFC’s latest show. The promotion, which typically drops anchor in Iowa or Kansas, will head to neighboring Nebraska for VFC 38. Both men are coming off losses -- Arocho to Englishman Ronnie Mann and Roberts to former Bellator champion Zach Makovsky. Roberts enters the fight as the slight favorite due to his knockout power, but the bigger and physically stronger Arocho could always end this in a submission. Japanese female promotion Jewels celebrates its four-year anniversary with this Dec. 15 event. Topping the bill are dangerous submission specialist Hamasaki and the experienced “Kamikaze Angel” Fujino. Hamasaki’s Jewels 115-pound title will be on the line in this excellent ladies encounter. The champion has never lost a professional MMA fight in her career, while Fujino has rounded into form, losing only to Megumi Fujii in the last two years. If Fujino wants to take the belt from the Invicta Fighting Championships veteran, maybe now is the time.

Cage Warriors owner Graham Boylan is throwing a New Year’s Eve party, and 1,200 selected Dubliners are invited. The fireworks will go off inside the cage, as the promotion’s featherweight champion, McGregor, moves up in weight to face top lightweight contender Buchinger for the vacant 155-pound strap. McGregor has been tipped for a future UFC berth due to his knockout power and exciting style, and a decisive win over the versatile, agile Slovakian would further support his employment application with a second title.

Europe’s top flyweight, Sitenkov, had already said goodbye to his longtime former weight class -- 135 pounds -- but returned for one last hurrah in the finals of the Cage Contender bantamweight tournament. There, he was upset by Patrick Holohan. The recipe for success against the Lithuanian grappling wizard seems easy enough: survive the early submission attack and then fish for a choke of your own. Will Sweden’s Haggstrom, who favors classic ground-and-pound, go that route?

“The Ultimate Fighter” Season 11 alum Bryant failed to make the UFC roster but refused to fade into obscurity. Instead, the 32-year-old all-rounder is trying to earn his way back to the center stage. “The Beast” can take a significant step forward by unifying his interim 185-pound title with Strickland’s King of the Cage middleweight crown. “Tarzan,” an undefeated knockout artist from the Golden State, figures to have other ideas.

Does Palelei have the style and skill to qualify for a second stint in the UFC? The Tongan knockout artist will take on fellow UFC castaway McCorkle in a nice heavyweight slugfest Down Under. “Big Sexy” had a six-fight winning streak snapped when he was knocked out by Brian Heden in March, but a patented first-round submission against Palelei could help repair the damage that was done.

Perhaps the top prospect to come out of Japan in recent years, Horiguchi is not playing it safe. Despite his young age and lack of experience, the 22-year-old Norifumi Yamamoto protégé has looked to fight the best and appears to be positioning himself for a jump to greener pastures. A strong performance against UFC veteran and reigning Tachi Palace Fights bantamweight champion Loveland could only help his cause.