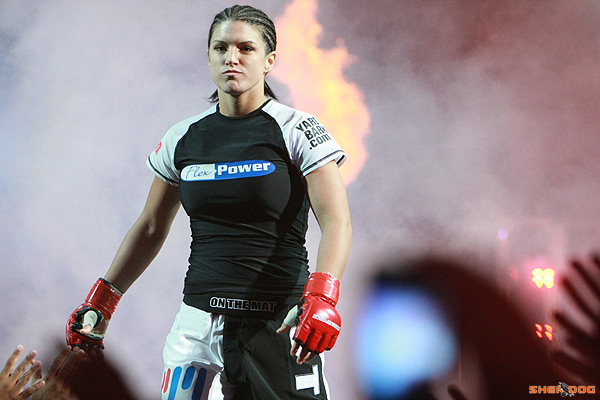 
Naturally, Carano was a lightning rod for criticism. Those savvy to the women’s MMA scene complained that she was being spoon-fed smaller fighters better suited for 125 and 135 pounds. Those complaints were only exacerbated by her repeated struggles to make EliteXC’s harebrained 140-pound weight class. They saw her growing celebrity, replete with Maxim pictorials and movie role offers, as incongruous to her fighting accomplishments. During the 2007-08 writers’ strike in Hollywood, Carano even starred as “Crush” on NBC’s revived edition of “American Gladiators.”

After financial issues and the threat of an investigation into the shambolic October 2008 main event between Slice and Seth Petruzelli killed EliteXC unceremoniously, Showtime Sports still wanted an MMA partner to promote many of the athletes it had invested in. In February 2009, Strikeforce boss Scott Coker and parent company Silicon Valley Sports Entertainment ponied up $3 million for select EliteXC assets, including fighter contracts. The decision immediately cast Strikeforce -- no longer a cute, productive regional promotion in San Jose -- as a competitor to the Ultimate Fighting Championship. In this era, direct UFC competitors have not enjoyed much success. Strikeforce followed that pattern and remained open just another two years before selling the company to Forza LLC, a shell company of UFC ownership group Zuffa. Yet, those two short years brought women’s MMA to a much greater audience and the start of a new, potentially lucrative era.

Carano fought just once more, contesting the vacant Strikeforce 145-pound’s women title and succumbing to the punches of brutal Brazilian hitter Cristiane “Cyborg” Justino, who was a -200 pre-fight favorite. It was the first female main event of any kind for Showtime and drew 856,000 viewers at its television peak, while simultaneously giving a shot of adrenaline to discussions about women in the sport. Afterward, Carano quickly cashed in on those Hollywood opportunities, foregoing future fights for a starring role in Steven Soderburgh’s “Haywire,” as well as the sixth and latest edition to “The Fast and the Furious” franchise. Yet, Carano remains a complex symbol in MMA history, a coalescence of magnetic beauty, athletic ability and opportunistic promotion, all of which had a pivotal impact on women’s place in the sport. 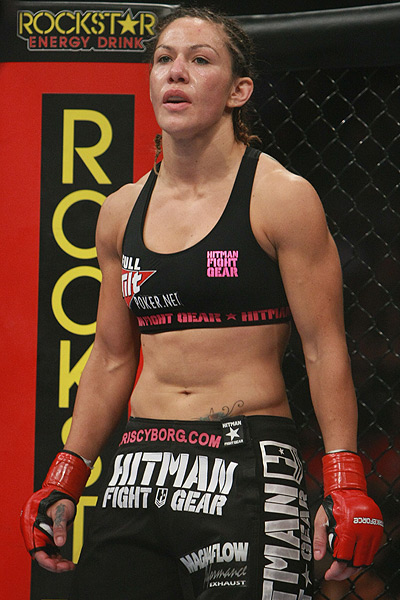 Photo: D. Mandel/Sherdog.com
No one is more feared than “Cyborg.”
Ronda Rousey entered MMA with a 2008 Olympic bronze medal in judo -- she was the first American woman to medal in the sport -- and had already appeared on Oprah. Her three-fight amateur career lasted less than two minutes combined, with all three foes falling to armbars. Her first four professional contests, all armbar wins, tallied a little more than two minutes. On March 3, 2013, less than a year after her pro career began, she captured Strikeforce’s 135-pound title from Miesha Tate via, of course, first-round armbar.

After a peak of 431,000 viewers on Showtime for her championship win, Rousey’s title defense against former champion Sarah Kaufman five months later peaked at 676,000 viewers despite lasting just 56 seconds, giving many viewers no time whatsoever to find the fight while channel surfing. It was not just Rousey’s arm-snapping dominance creating the buzz, either. Despite her obvious pulchritude, Carano was not necessarily a natural with the media as an awkward blend of natural shyness and forced coquettishness. Rousey not only had a professional wrestling-esque gift of gab but a harrowing and triumphant personal backstory, given her father’s tragic
suicide in her childhood.

Rousey’s force-of-will and force-of-personality changed the landscape instantaneously. Even as the drumbeat for women having a greater place in MMA echoed loud, UFC President Dana White was resolute for years that women would never fight in the Octagon. Maybe it was bluster all along. After all, a bout between Shelby Walker and Erica Montoya was seriously discussed for UFC 51 back in 2005. Moreover, Montoya was in the UFC’s “Sudden Impact” video game. However, White now freely admits it was Rousey -- her fight style and her persona -- that made him reconsider his questionable public stance.

In the UFC 157 headliner on Feb. 23, 2013, Rousey converted her Strikeforce title into the first-ever women’s UFC women’s bantamweight crown, tapping out Liz Carmouche out with an armbar in front of a packed Honda Center in Anaheim, Calif. The bout was given top billing over a co-main event between the legendary Dan Henderson and former UFC champion Lyoto Machida.

Rousey’s sport-and-sex symbol status was not the only positive outcome from the death of Strikeforce. Former Strikeforce executive Shannon Knapp stepped forward with business partner Janet Martin to launch the all-women’s promotion Invicta Fighting Championships in April 2012. Knapp, a Brown University graduate who had also spent time in the offices of the UFC and the International Fight League, and Martin, a promoter under her Blackeye Entertainment banner, have quickly produced what has been the most professional, legitimate all-female MMA promotion in history.

Given that the UFC has to date only staged women’s fights at 135 pounds, there is a need for a major female fighting platform for lighter and heavier fighters. It remains to be seen whether a niche product like Invicta can ultimately find the necessary ticket sales or television deal that could secure its long-term presence in the MMA landscape. However, the same lack of clarity exists within the UFC.

UFC 157 drew 500,000 pay-per-view buys -- a number that would be considered outstanding for nearly every UFC star other than perhaps Georges St. Pierre, Anderson Silva or Jon Jones. No women’s boxing PPV has ever done more than 125,000 buys; that record was established when Muhammed Ali’s daughter, Laila Ali, battled Joe Frazier’s daughter, Jacqui Frazier-Lyde, in June 2001. It came at the height of an uptick in interest in women’s boxing, spearheaded by the likes of Ali and April 1996 Sports Illustrated cover girl Christy Martin. However, that brief moment in sports history passed, symbolically dying on Dec. 6, 2002, when Martin won a unanimous decision over overhyped model-cum-boxer Mia St. John in front of an estimated 300 people -- yes, three hundred -- in the cavernous Pontiac Silverdome in Detroit. The UFC and MMA on the whole have endured a mini-recession after the sudden salad days of 2005-09. It is hard for even the most passionate champions of women’s MMA to not be skeptical, to fight the feeling that this glory is ephemeral and fleeting.

As champions of women’s sports are keen to point out, we are just now entering the first generation of amateur and professional female athletes who have had a “lifetime to play.” Women’s wrestling was added to the Olympics in 2004, and women’s boxing made its return 108 years after it was shown as an exhibition sport in 2012. A girl can now realistically grow up idolizing a fighter like Rousey and, crazier still, actually have the opportunity follow in her footsteps.

Women’s MMA is flourishing, but its future remains uncertain. However, history assures us that no matter the most trying circumstances, women will fight with their fists for money. When they do, eyes will be drawn to the violence, keenly aware of what “two of the feminine gender” are capable of when brought together.