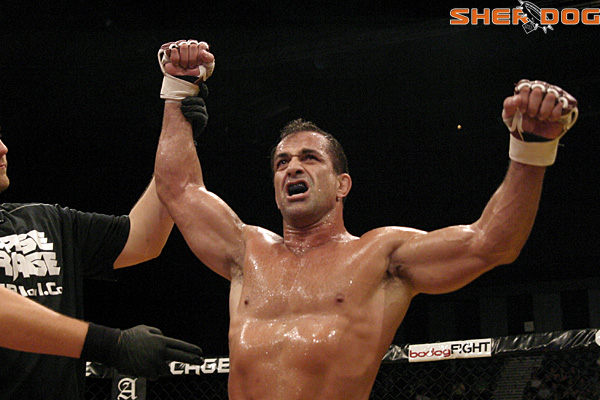 Mario Sperry was spawned by martial arts royalty. A protégé of the late Carlson Gracie, he became one of the found members of Brazilian Top Team, a legendary fight camp that produced Antonio Rodrigo Nogueira, Antonio Rogerio Nogueira, Vitor Belfort, Paulo Thiago and Rousimar Palhares, among others.

Though he has remained active on the Brazilian jiu-jitsu scene, Sperry, now 45, has not competed in mixed martial arts since July 2007, when he submitted Lee Hasdell with a first-round rear-naked choke at Cage Rage 22. Of his 17 professional bouts, seven came under the Pride Fighting Championships banner, including his November 2001 submission against Igor Vovchanchyn. Sperry still keeps his finger on MMA’s pulse and recently joined forces with the Imperial Athletics dojo in Florida.

In this exclusive interview with Sherdog.com, Sperry discusses the opportunity to help train Rashad Evans for his upcoming title bout, Evans’ chances of dethroning light heavyweight champion Jon Jones at UFC 145 and the possibility of restarting his own fight career:

Sherdog.com: How did the invitation to work with Rashad Evans come about?
Sperry: Last year, through fighter and friend Danillo Villefort, I received an invitation from manager Glenn Robinson to help out with training with the “Blackzilians.” At the time, I could not accept for personal reasons. However, I pointed them to Flavius [Silva]. I knew him a long time ago and met him again through Everaldo Penco, who was the head coach for my match against Renzo [Gracie] at the [Abu Dhabi Combat Club Submission Wrestling World Championships] in 2011. I was impressed with Flavius’ potential, not only for his fighting and a coaching ability but for his transparency and character. I was very comfortable in endorsing him. Everyone liked him, and, today, Flavius is responsible for the jiu-jitsu training for the team. In November, I went to Disney World with my family and visited the gym. I met Glenn personally, trained with the fighters and taught a ground training class focused on MMA. Soon after, Glenn reached out to me to find out what it would take for me to go to the United States and help Rashad with training. At first, I couldn’t accept, but I fixed my work schedule so I could spend some time there.

Sherdog.com: How would you describe your training at Team Nogueira for your ADCC match with Renzo Gracie?
Sperry: First, I have to thank Sheikh Tahnoon, who invited me to compete in the ADCC. I spent some time training sporadically at Gordo JJ, where I felt entirely at home. However, the practice time was not compatible with my work schedule, which hindered my ability to keep a workout routine. After being invited to compete, I went to Team Nogueira, where I was forced to train hard again. I took a beating from some of the younger guys, but I got back in shape with the help of jiu-jitsu and conditioning coaches Everaldo Penco and Diogo de Souza. With the improvement in training, I could see why competing makes me happy, and I haven’t stopped training since. With the passion to compete back in my life again, I was inclined and honored to accept the invitation [to train Evans]. I saw it as one more opportunity to get close to the martial arts world, one more opportunity for me to expand my history in the sport by participating in the biggest promotion in the world. Besides, I really liked Glenn. He’s a good person, straightforward and transparent. Doing business with him is a privilege.

Sherdog.com: Do you believe someone from the Chute Boxe and Brazilian Top Team heydays could defeat UFC light heavyweight champion Jon Jones?
Sperry: Jones is one of the most complete fighters today. It’s very difficult to guess what would happen between him and a Brazilian Top Team or Chute Boxe fighter at the height of his career. Today, we’re in a completely different world. The athlete’s access to information is on another level, and the business side of the sport is entirely different. The athletes are much more prepared today.

Sherdog.com: What are Evans’ chances against Jones at UFC 145?
Sperry: In my estimation, the chances of victory are real. I’ve never liked to lose, so I would have accepted the invitation if I didn’t think Rashad could win. The fight is difficult, but we define ourselves by the challenges that we choose to face. You’ll see the path to victory on the day of the fight.

Sherdog.com: How long do you plan to be with the “Blackzilians” camp?
Sperry: Forty days. Fortunately, today, I have the reins of my business in my hands. I’m surrounded by people who are very competent and much better at what they do than me. Florida is next door and, with the Internet, everything became easier as it relates to communication.

Sherdog.com: Do you think about fighting again?
Sperry: It would be a privilege to fight again. However, I don’t see how I could combine training with my other duties. I think about it almost every day. Maybe soon, I’ll find away. Until then, I’ll keep training with several professional athletes at the Nogueiras’ training center, where I learn every day, try to stay fit and, at the end of the day, find what we all seek: to do what we like to do and become even happier.