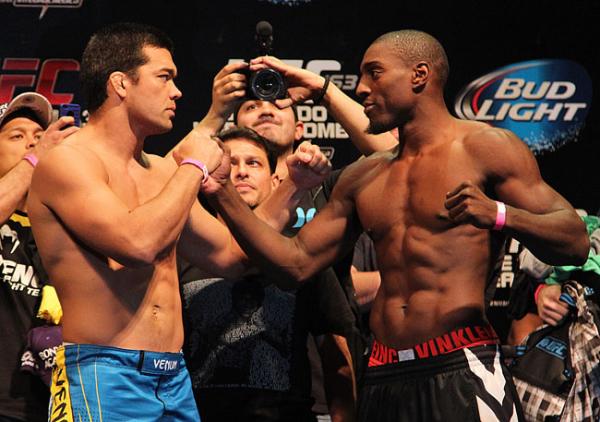 The Lyoto Machida vs. Phil Davis decision will be much debated in the coming weeks. | Photo: Marcelo Alonso/Sherdog.com

Alliance MMA fighter Phil Davis (+285 according to BetDSI) did succeed in wresting a win away from heavy favorite Lyoto Machida (-345), but the victory was not without controversy.

Although Davis landed takedowns and scored points with kicks and punches, the man they call “The Dragon” appeared to land the more significant blows in all three rounds. However, all three judges scored the bout 29-28 in favor of Davis, meaning that “Mr. Wonderful” technically did beat the odds in obtaining the hotly-contested win.

The most astonishingly unexpected win of the night was none other than Anthony Perosh. The Australian underdog (+300) exposed the weak chin of Vinny Magalhaes (-400), by landing a right cross on the button.

The 40-year-old finished Magalhaes via knockout in just 14 seconds. This is in stunning contrast to the Hippo’s last fight, in which he lost the bout in only seven seconds due to a Ryan Jimmo KO.

Last but not least, Francimar Barroso (+115) defeated Ednaldo Oliveira (-145), despite being a slight underdog. Barroso stepped in on short notice when Robert Drysdale was forced to pull out of the fight due to a staph infection, and although the fight was not exactly memorable, the Nova Uniao product did enough to win via decision (30-27, 30-27, 29-28).

The two fighters were very evenly matched on paper, but in retrospect, Oliveira had lost a bout to Gabriel Gonzaga. And although he’s racked up a huge amount of wins, none were against the caliber of opponents found in the UFC. The same could be said about Barroso, though, who’d been fighting in WOCS and Shooto Brazil.

Ultimately, it was Barroso’s leg kicks, takedowns and combinations that helped him secure the W. Oliveira’s awkwardness on the feet also didn’t lend him any favors.