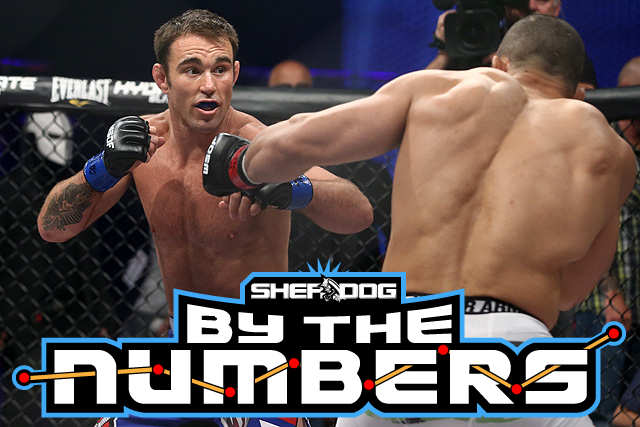 Jake Shields has one thing in mind when he steps inside the PFL cage on Oct. 20: avenge his loss to Ray Cooper III.

In the past, Shields has been successful once with a rematch, and that’s against his opponent’s own father, Ray Cooper. As the Cesar Gracie Fight Team charge tries to repeat history at the Entertainment and Sports Arena in Washington D.C., ponder on some numbers that have made him such a reliable and crafty veteran:

11: Years as a Brazilian jiu-jitsu black belt. He earned the rank in February 2007 from Professor Cesar Gracie.

4: Other fighters and fellow Cesar Gracie students with whom the group “Skrap Pack.” It includes Gilbert Melendez, David Terrell and the Diaz brothers.

185: Was the first weight division he fought in. Filling in for an injured teammate, Shields entered his first MMA competition and knocked his opponent out in the first round.

2: Wins to start his professional career. He TKOd Paul Harrison and decisioned Brian Warren to make it two in a row.

9: Takedowns scored on Jason Miller in their Strikeforce title showdown. Shields’ wrestling was a huge factor in the fight. He won by unanimous decision to take the belt, and successfully defended it against Dan Henderson.

15: Consecutive victories in a span of five years. After losing to Akira Kikuchi, he compiled successive wins from November 2005 to October 2010, including his conquests of Yushin Okami, Carlos Condit, Robbie Lawler, Martin Kampmann and Henderson.

2: Fights with Kikuchi. Shields lost to the former Shooto welterweight champion in August 2003, and got even when they met again in December of the following year.

8: Fights in the Ultimate Fighting Championship, with a record of 4-3-1. Shields’ Octagon stint includes victories over Tyron Woodley and Demian Maia, as well as a championship fight with Georges St. Pierre. His losses came at the hands of St. Pierre, Jake Ellenberger and Hector Lombard.

10: Takedowns in the UFC. Shields made great use of his wrestling by taking down the likes of Ed Herman and Martin Kampmann.

3: Wins by knockout. Shields isn’t exactly known for his punching power, but he has landed some well-placed punches that ended in a KO or TKO. He has knockout wins over Paul Harrison, Steve Berger and Renato Verissimo.

5: Full rounds with St. Pierre in a hard-fought title fight that saw the French-Canadian retaining his belt. According to Fightmetric, St. Pierre scored two takedowns and slightly outstruck him, 85-78.

4: Countries in which he fought. The American has fought in different parts of the world, including Canada, Japan, Costa Rica and Brazil.