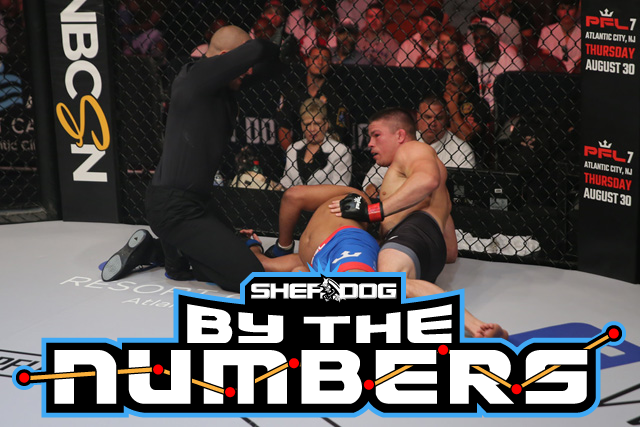 Rick Story was having a decent run in the Ultimate Fighting Championship when he decided to enter Professional Fighters League. In fact, the premiere fight promotion offered him a contract extension, but he politely declined.

Story will kick off the playoffs opposite knockout artist Handesson Ferreira. As they prepare to clash this weekend at the Entertainment and Sports Arena in Washington D.C., take a look at the numbers that make him such a formidable figure.

3: Full rounds to a losing cause in his professional debut. It happened in an event called Conquest of the Cage, against fellow future UFC fighter Mario Miranda.

3: Straight fights in which he fought future UFC fighters to start his career. Story went 1-2, losing to Miranda and Nathan Coy, and defeating Julio Paulino.

2: Six-fight winning streaks. After the loss to Coy, Story won six straight, most notably over Jake Ellenberger. He then lost to promising Englishman John Hathaway and bounced back with another six-fight winning run, highlighted by triumphs over Johny Hendricks and Thiago Alves.

5: Full rounds to capture the Elite Warriors welterweight championship at the expense of Ryan Healy. Story defended the belt in spectacular fashion, choking out Brandon Melendez inside the first round. After this fight, he was signed by the UFC.

69: Seconds to choke out Brian Foster at UFC 103. It was his second fight and first win in the UFC, and it earned him both Submission of the Night and Fight of the Night honors.

10: Straight fights in which he scored at least one takedown. The 2006 NAIA wrestling runner-up scored the most takedowns on Brock Jardine with five.

40: Takedowns in the UFC. Story was unstoppable with his takedowns until he met Demian Maia, who stopped him early via neck crank at UFC 153.

63: Percent total takedowns avoided. Only Maia, Kampmann, Brenneman, Hendricks, Hathway and Nick Osipczak were able to take him to the ground at least twice.

168: Significant strikes against Gunnar Nelson’s 53, per Fightmetric. With another world-class grappler in front of him, Story kept the fight on the feet to win by unanimous decision. Story dealt the Iceland native the first loss of his career.

5: Submission victories, three by rear-naked choke and two by arm triangle. Story was able to tap out Melendez, Foster, James Dodge, Leonardo Mafra and Carlton Minus.

2: Times he was stopped. The 30-fight veteran was TKO’d by Cerrone and submitted by Maia.