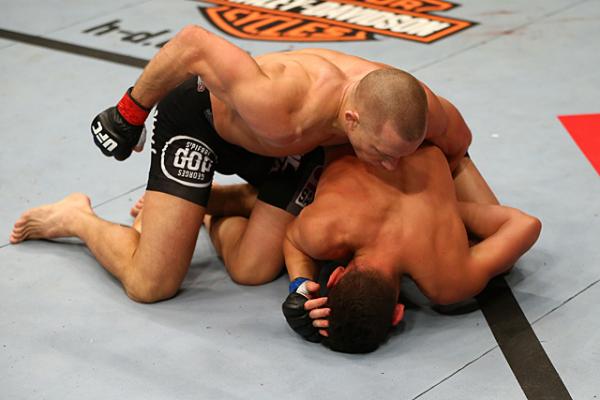 
Strip away all the hype and trash talk, and what you ultimately get is another predictable outcome. While Nick Diaz generated plenty of interest in the UFC 158 main event with his pre-fight antics, it was Georges St. Pierre who dictated the action in the Octagon on Saturday night.

When all was said and done, “Rush” outstruck and outwrestled his antagonist in yet another dominant performance to retain his title in front of a partisan crowd at the Bell Centre in Montreal. As the reign of the welterweight champion moves forward, the figures continue to pile up in his favor. Diaz, meanwhile, is left to ponder his passion for the sport. Here is a by-the-numbers look at UFC 158, with statistics courtesy of FightMetric.com.

2: Unofficial retirement announcements by Diaz in his last two bouts. The Stockton, Calif., native also said he was going to call it a career following a loss to Carlos Condit at UFC 143.

5:03:12: Total fight time in the career of St. Pierre, who passed Randy Couture and Tito Ortiz to move into second place on the promotion’s all-time list. Only B.J. Penn (5:03:51) has logged more Octagon time than the Tristar Gym representative.

9: Takedowns landed in 15 attempts by St. Pierre, who was able to take down Diaz at least once in each frame. St. Pierre has averaged 7.6 takedowns per fight in his last six bouts.

105: Total ground strikes by which St. Pierre outlanded Diaz. The Canadian landed 92 strikes to the head and 37 to the body on the mat during the five-round affair.

84: Takedowns landed by St. Pierre during his UFC tenure, most of any fighter in the promotion. File Photo
Hendricks edged a game Condit.
15: Years since the UFC first introduced the 170-pound division -- originally called lightweight -- with a tournament at UFC 16, according to MMADecisions.com. Pat Miletich defeated Townsend Saunders and Chris Brennan to win the bracket that evening.

6: 170-pound bouts on the UFC 158 bill, beginning with Rick Story vs. Quinn Mulhern and ending with St. Pierre vs. Diaz.

12: Takedowns landed, in 15 attempts, by Johny Hendricks in his unanimous decision victory over Carlos Condit. “Big Rigg” landed four takedowns in each frame -- his previous best of eight takedowns came against T.J. Grant at UFC 113. St. Pierre landed seven takedowns in his UFC 154 triumph over “The Natural Born Killer.”

27: First round finishes between Marquardt and Jake Ellenberger after “The Juggernaut” knocked out the former Strikeforce champion 3:00 into the opening round of their welterweight encounter.

13-0: Record for Ellenberger in contests that end inside of a round. The Nebraskan has stopped Sean Pierson, Jake Shields and Marquardt in the initial stanza during his time in the UFC.

11: Significant strikes by which Bobby Voelker outlanded Patrick Cote. Voelker outscored his opponent in rounds two (37 to 36) and three (31 to 10). Voelker, who also landed four takedowns in five attempts, lost a unanimous decision to his Canadian opponent.

21: Professional bouts for Dan Miller without being finished. Jordan Mein became the first person to stop the AMA Fight Club product with his first-round TKO victory on Saturday night. Miller’s previous six losses had all been via decision.

5: Featherweight victories for Darren Elkins, who scored a controversial first-round TKO over Antonio Carvalho. That ties him with Dustin Poirier for most wins of anyone in the 145-pound division.