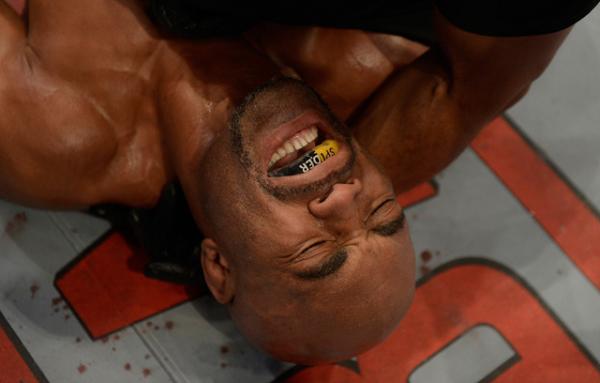 
The most hyped event of 2013 ended on a somber note. While no one can deny the overall skill of Chris Weidman, his second victory over Anderson Silva will forever be remembered for the grotesque image of Silva’s leg breaking on a checked kick in the UFC 168 headliner. Weidman’s middleweight reign may be just beginning, but the injury could very well mean the end of “The Spider” era in the UFC. Just like their first bout, Weidman-Silva II finished abruptly and unexpectedly.

Meanwhile, women’s bantamweight champion Ronda Rousey survived the toughest test of her career against Miesha Tate in the evening’s co-headliner. Fighting past the opening round for the first time in her career, Rousey kept the pressure on to submit “Cupcake” in the third round of their entertaining clash. With their bitter rivalry likely at its end, the next task will build new and interesting challengers for Rousey. Here is a by-the-numbers look at UFC 168, an event that will not soon be forgotten.

2: Difference, in seconds, between the time of the stoppage of Weidman’s first win over Silva (1:18 of round two) and his second triumph (1:16 of round two) over the former pound-for-pound king.

10:58: Octagon time for Rousey against Tate in their co-headlining bout, the longest fight of the Olympic judoka’s pro career. None of “Rowdy’s” previous seven foes made it out of the first round.

6: Armbar victories in the UFC and Strikeforce for Rousey, who submitted Tate with her trademark maneuver 58 seconds into the third round of their women’s bantamweight title showdown. Of fighters with appearances in the UFC, Strikeforce, WEC and Pride Fighting Championships, only Antonio Rodrigo Nogueira (7) has more.

106: Total strikes by which Rousey outlanded Tate. The champion landed 134 strikes in the bout, easily the most of her UFC/Strikeforce tenure. Her previous best of 43 strikes landed came in her first meeting with Tate in March 2012.

4,691: Days since Barnett’s only other knockout defeat, a second-round KO loss to Pedro Rizzo at UFC 30.

100: Percentage of takedowns successfully defended by Browne in the UFC. Browne stopped Barnett’s lone takedown attempt in their heavyweight clash, making him 8-for-8 in the Octagon.

30: Career submission attempts for Jim Miller, No. 2 in UFC history behind Chris Lytle (31). Attempt No. 30 was an armbar that elicited a tapout from Brazilian jiu-jitsu black belt Fabricio Camoes at the 3:42 mark of the opening frame.

67: Significant strikes by which Diego Brandao has been outlanded during his six-bout UFC tenure. Dustin Poirier outlanded the Brazilian 44 to 16 en route to a first round technical knockout victory on Saturday night. The only UFC bout in which Brandao held a significant strike advantage over his opponent was his first-round submission triumph against Pablo Garza at UFC on Fuel TV 9; the Jackson’s MMA product outlanded Garza 9-4 in that contest.

7: UFC bouts to be called at the 5:00 mark of round one after Chris Leben elected not to continue following the opening round of his middleweight scrap with Uriah Hall. “The Ultimate Fighter 17” runner-up dropped Leben with a straight right in the waning seconds of the frame and followed up with heavy punches on the ground before “The Crippler” was saved by the bell.

10: UFC losses for Leben, one of only four men to drop that many bouts in the Octagon. Tito Ortiz, Chris Lytle and David Abbott are the others, according to MMADecisions.com.

2,597: Days since Gleison Tibau’s last KO/TKO loss, a second-round TKO defeat against Nick Diaz at UFC 65. The hulking Brazilian was stopped by Michael Johnson 1:32 into the second round of their lightweight clash.

8: Knockdowns landed by Michael Johnson over the course of his 10-bout UFC career, tying him with Yves Edwards for second most in UFC lightweight history. Melvin Guillard has the most with 13.

0: Takedowns landed by Tibau in two attempts against Johnson. Coming into the bout, Tibau’s 71 career takedowns landed ranked No. 2 in UFC history behind Georges St. Pierre.

6: Fighters who have competed four times in the Octagon in 2013. They are: Tibau, Joseph Benavidez, Donald Cerrone, Uriah Faber, Gabriel Gonzaga and Rafael Natal.

191: Total strikes landed by Dennis Siver in his unanimous decision triumph over Manny Gamburyan. The Russian-born German held a 155 total strike advantage in the featherweight bout, outlanding his opponent 59 to 3 in round one, 63 to 22 in round two and 69 to 11 in round three.

5-7: Record for Bobby Voelker in bouts that go the distance. The Strikeforce veteran is 19-4 in contests that end via knockout, technical knockout or submission. “Vicious” dropped a three-round verdict to “TUF: Brazil” Season 2 competitor William Macario in a preliminary welterweight clash.

0:12: Seconds into the third round that Robbie Peralta stopped Estevan Payan in their featherweight clash, the quickest KO/TKO to start a third round in UFC history.