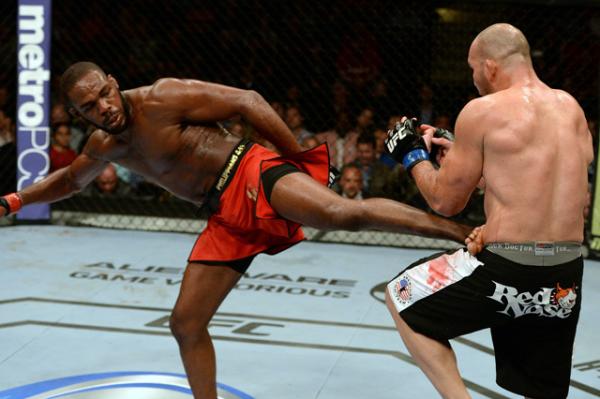 Jon Jones his Glover Teixeira with everything but the kitchen sink at UFC 172. | Patrick Smith/Zuffa LLC/Getty Images


At 26 years old, Jon Jones has yet to reach his prime. That should be a scary thought for anyone who witnessed the light heavyweight champion’s five-round domination of Glover Teixeira in the UFC 172 headliner at the Baltimore Arena on Saturday night.

“Bones” showcased his usual diverse arsenal in taking a unanimous decision over Teixeira, but he was perhaps most effective in close quarters, where he battered the Brazilian with a barrage of punches and elbows against the fence. While the challenger was resilient enough to make it to the judges, he was unable to put together enough offense to consistently threaten the Jackson-Wink MMA product. Here is a by-the-numbers look at UFC 172, with statistics courtesy of FightMetric.com.

35: Kicks to the legs landed by Jones. Teixeira landed just one leg kick during the 25-minute bout.

0: Takedowns landed, in five attempts, by Teixeira. Overall, Jones’ opponents have landed just one takedown in 29 attempts. Gustafsson remains the only person to have successfully taken down the light heavyweight champion in the Octagon. Jones, meanwhile, landed three of his six takedown attempts.

3,318: Days since Teixeira’s last defeat, a unanimous decision loss to Ed Herman at SportFight 9 “Respect” on March 26, 2005. Teixeira had won 20 straight fights prior to Saturday’s loss.

11: Consecutive light heavyweight victories for Jones, a divisional record. It is also ties him with Royce Gracie for third-longest streak in the UFC behind Georges St. Pierre (12) and Anderson Silva (16).

7: Consecutive successful title defenses for Jones, a light heavyweight record and the third-longest streak in UFC history overall behind only Georges St. Pierre (8) and Anderson Silva (10).

24: Significant strikes by which Anthony Johnson outlanded Phil Davis in the light heavyweight co-headliner. The Blackzilians representative held his greatest striking advantage in the opening round, when he outlanded Davis 17 to 2 in significant strikes.

0: Takedowns landed in eight attempts by Davis. The former All-American wrestler at Penn State University never came close to getting Johnson to the canvas during their middleweight encounter. “Mr. Wonderful” has landed 22 takedowns in his UFC career.

10: First round finishes among 12 career victories for Luke Rockhold, who tapped Tim Boetsch with a kimura 2:08 into the opening stanza of their middleweight clash.

13: Lightweight victories in the UFC for Jim Miller, tying him with Geison Tibau for most in promotion history within the division. Miller earned his 13th triumph with a first-round guillotine of Yancy Medeiros on Saturday night.

31: Submissions attempted by Miller during his 17-bout UFC tenure, tying him Chris Lytle for most in promotion history. Miller has attempted at least one submission in all but two of his UFC appearances -- losses against Nate Diaz and Pat Healy (The Healy bout was later overturned to a no contest).

3: Takedowns landed, in 12 attempts, by Andre Fili against Max Holloway. The Team Alpha Male product succumbed to a guillotine choke 3:39 into the third round of their bantamweight matchup.

5: Flyweight victories for Joseph Benavidez in the Octagon, tying him with champion Demetrious Johnson for most 125-pound triumphs in UFC competition. Benavidez submitted Tim Elliott with a guillotine choke 4:08 into the opening round of their flyweight bout.

364: Combined total strikes landed by Takanori Gomi and Isaac Vallie-Flagg in their lightweight clash. While Vallie-Flagg held a 211-153 advantage in total strikes, “The Fireball Kid” had a 130-107 edge in significant strikes. Landing the more damaging shots proved to be the difference, as Gomi won via unanimous decision.

37: Significant strikes by which Bethe Correia outlanded Jessamyn Duke in their bantamweight bout. The Brazilian was able to outstrike her opponent and capture a unanimous decision despite being at a nine-inch reach disadvantage.

100: Percentage of Charlie Brenneman’s six UFC losses that have ended via knockout or submission. In addition to his second-round KO suffered at the hands of Danny Castillo, “The Spaniard” has been finished by Beneil Dariush (rear-naked choke), Kyle Noke (TKO), Erick Silva (rear-naked choke), Anthony Johnson (head kick) and Johny Hendricks (TKO) in the Octagon.

44: Bouts held by the UFC during a four-event, two-week span beginning with UFC Fight Night “Minotauro vs. Nelson” on April 11 and ending with UFC 172 on Saturday night.