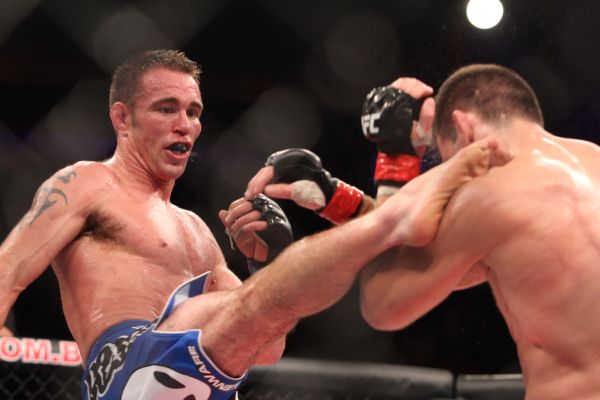 
Demian Maia’s welterweight title hopes hit a nasty speed bump on Wednesday night. Headlining the UFC Fight Night 29 card in front of his countrymen in Barueri, Brazil, Maia dropped a grueling split decision to fellow grappling ace Jake Shields. After posting three straight victories to begin his 170-pound tenure, Maia was unable to mount enough offense – either on the ground or on the feet – to sway the cageside judges’ opinion in his favor. Shields, meanwhile, has been victorious in his last four outings.

While the main event served to satiate the appetite of the jiu-jitsu aficionado, the co-headliner delivered the evening’s most resounding finish, as Dong Hyun Kim rallied to knock out Erick Silva with a massive overhand left in the second round of their 170-pound clash. Considering the success that both Shields and Kim had in featured bouts, traveling to Brazil might not seem as daunting to foreign fighters in the future. Here is a by-the-numbers look at UFC Fight Night 29, with statistics courtesy of FightMetric.com.

12-1: Record for Maia in bouts in which he lands at least one takedown. The decorated grappler was undefeated in those contests until losing to Shields in Wednesday’s headliner. Overall, Maia landed three of his seven takedown attempts, while Shields succeeded just once in 12 tries.

195: Combined total strikes landed by Maia and Shields. While Maia narrowly outlanded Shields 98-97 overall, each fighter had a dominant frame: Shields outlanded Maia 33 to 5 in round two, while Maia owned a 36 to six advantage in round four.

0: Submission attempts combined for Maia and Shields. Coming into the bout, the pair had 19 career submission victories between them.

1,964: Days since Kim’s last stoppage victory, which came in his promotional debut against Jason Tan at UFC 84. “Stun Gun” landed a huge overhand left to knock out Silva 3:01 into the second round of their welterweight conflict on Wednesday night.

96: Significant strikes landed by Thiago Silva in his victory over Matt Hamill, a career high for the Brazilian light heavyweight. Silva’s previous best of 62 came last year against Stanislav Nedkov at UFC on Fuel TV 6.

5.72: Significant strikes landed per minute by Maldonado during his UFC career, the fourth-highest figure in the promotion.

2: Fighters in the modern era to have earned two tapouts in the Octagon in less than a minute. Rousimar Palhares captured his second such victory at UFC Fight Night 29 by submitting Mike Pierce with a heel hook 31 seconds into their welterweight showdown. Previously, “Toquinho” stopped Tomas Drwal with a heel hook in 45 seconds at UFC 111. Frank Mir has three submission victories (Tim Sylvia, Pete Williams, David “Tank” Abbot) in less than a minute.

5: UFC triumphs via heel hook for Palhares. Overall, the Brazilian is 11-0 in bouts that ended by submission. He is 4-5 in fights that ended via decision or knockout.

4: Victories in bouts examined by FightMetric.com in which Palhares has not landed a single significant strike. In addition to his triumph over Pierce, the Team Nogueira representative also bested Flavio Luiz Moura, Ivan Salaverry, and Drwal without landing a significant strike.

6: Takedowns defended in six attempts by T.J. Dillashaw in his split-decision defeat to Raphael Assuncao. Despite the setback, the Team Alpha Male product has yet to be taken down in UFC competition.

128: Total strikes landed by Igor Araujo in his three-round verdict over Ildemar Alcantara. The “TUF 16” cast member outlanded his foe in every round, including a 67-to-3 edge in round three.

11: Guard passes executed by Yan Cabral in his unanimous decision triumph over fellow Brazilian jiu-jitsu black belt David Mitchell. The debuting Brazilian controlled positioning for much of the welterweight bout and also landed four of his six takedown attempts.