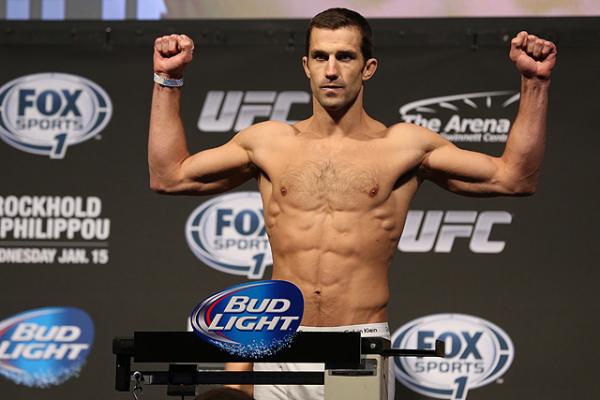 Just in case Vitor Belfort made you forget how good Luke Rockhold can be, the American Kickboxing Academy product used the UFC Fight Night 35 main event to provide a little reminder.

Rockhold put Costas Philippou away with a brutal liver kick 2:31 into the opening round of their showdown at the Arena at Gwinnett Center in Duluth, Ga., on Wednesday night to reclaim his spot among the promotion’s middleweight contenders. It was his first appearance since suffering a first-round knockout loss to Vitor Belfort at UFC on FX 8 this past May.

While Rockhold stole the show, there were others -- Brad Tavares, T.J. Dillashaw, Yoel Romero Palacio, to name a few -- who also earned significant victories. Here is a by-the-numbers look at UFC Fight Night 35, with statistics courtesy of FightMetric.com.

9: First-round finishes for Rockhold, who dispatched Philippou 2:31 into the opening frame of their middleweight headliner. Of his 11 professional victories, only Ronaldo Souza and Tim Kennedy have made it past the first round against the American Kickboxing Academy product. Both Souza and Kennedy went the distance against Rockhold in five-round title bouts in Strikeforce.

8: UFC bouts that have ended via body kick after Rockhold’s kick connected with Philippou’s liver to finish their middleweight tilt in round one.

.857: Percentage of Tavares’ UFC victories that have gone the distance. In winning seven of eight bouts inside the Octagon, the Hawaiian middleweight’s only finish came against Phil Baroni at UFC 125. Tavares outpointed Lorenz Larkin in the evening’s co-main event.

1: Fighter to have earned consecutive third-round TKO victories in the UFC. Romero, who also stopped Rony Markes in the third period in his at UFC Fight Night 31, became the first to accomplish the feat.

21: Significant strikes by which Romero outlanded Brunson in the decisive third stanza. The Cuban outlanded his opponent 23 to 22 in rounds one and two combined.

0: Takedowns landed in four attempts by Romero; Brunson went three for five on takedowns. Romero was a five-time medalist at the FILA World Championships and a silver medalist in freestyle wrestling at the 2000 Summer Olympics, while Brunson was a three-time Division II All-American wrestler at the University of North Carolina at Pembroke.

23: Submissions attempted by Cole Miller in his UFC career after tapping out Sam Sicilia with a second-round rear-naked choke. That ties him with Hermes Franca, Georges St. Pierre and Nate Diaz for No. 5 all-time in the promotion. Joe Stevenson is No. 4 with 24.

7: UFC victories via submission for Miller, tying him with Joe Lauzon for No. 5 in promotion history. The American Top Team product is behind only Frank Mir (8), Kenny Florian (8), Nate Diaz (8) and Royce Gracie (11).

2,363: Days since Isaac Vallie-Flagg’s last loss in the cage, a first-round submission defeat at the hands of Rudy Bears at King of the Cage “Hierarchy on July 28, 2007. Vallie-Flagg suffered his first setback in 13 fights against Elias Silverio on Wednesday night.

136: Total strikes landed by Silverio, who landed at least 42 strikes in each frame. By comparison, Vallie-Flagg landed 37 total strikes. The Brazilian also had an 81-to-21 edge in significant strikes landed.

42: Significant strikes by which Louis Smolka outlanded a fatigued Alptekin Ozkilic in the third round of their flyweight encounter. In the first two rounds, which were more closely contested, Ozkilic held a 48-to-38 edge in significant strikes. However, Smolka would prevail via unanimous decision.

9: Takedowns landed in 14 attempts by Ozkilic, the most of anyone on the UFC Fight Night 35 card. “The Turkish Delight” landed three takedowns in all three frames against Smolka.