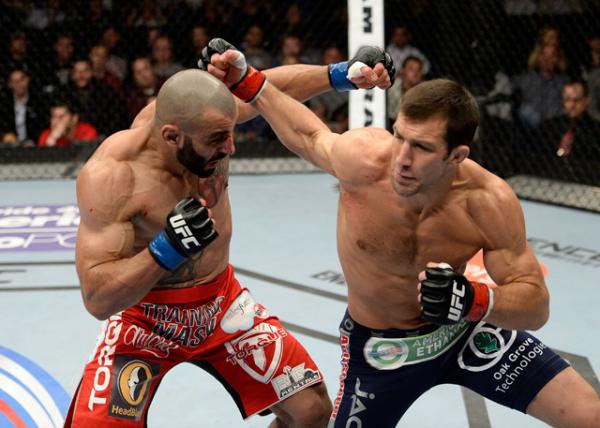 Luke Rockhold was on a different level than the competition at UFC Fight Night 35. | Jeff Bottari/Zuffa LLC/Getty Images


Luke Rockhold could not have been more cold or efficient.

The former Strikeforce middleweight champion dispatched Costas Philippou with a vicious kick to the body in the UFC Fight Night 35 main event on Wednesday at the Arena at Gwinnett Center in Duluth, Ga. The liver kick folded Philippou where he stood, driving him to the base of the cage and rendering him incapable of continuing 2:31 into round one.

Rockhold took not a small step but a giant leap towards erasing the memories of his knockout loss to Vitor Belfort in May. In doing so, the 29-year-old American Kickboxing Academy export also reminded the finicky MMA world why some see Ultimate Fighting Championship gold in his future. It was Rockhold’s 10th win in 11 appearances and the ninth first-round finish of his career. The historically durable Philippou had never before been stopped by strikes or submission.

Patience and precision, two hallmarks of Rockhold’s rise to power, were in play again, as he stalked the Cypriot from the start, cracked him with a right hook and then uncorked a pair of kicks, the second of which ended the fight.

The loss to Belfort notwithstanding, Rockhold appears to have re-entered the discussion of top contenders at 185 pounds. He put the bull’s eye on “The Ultimate Fighter” Season 3 winner Michael Bisping after he did away with Philippou; a victory over “The Count” -- the man MMA fans love to hate has not fought since he suffered a detached retina -- would certainly serve to further raise Rockhold’s profile, domestically and abroad. Provided Bisping proves healthy, the matchup seems to make sense for both the fighters and the UFC.

A proven, middle-tier middleweight, Philippou does not figure to lose too much ground in defeat. The 34-year-old former Ring of Combat champion will likely continue to catch meaningful fights at 185 pounds, even as he now shoulders the burden of a two-fight losing streak. Perhaps a matchup with Reign MMA’s Mark Munoz could be in order for the Bellmore Kickboxing Academy representative. Munoz was felled by a Lyoto Machida head kick in October and has lost twice in his last three outings.

In the wake of UFC Fight Night 35, here are five other matchups that ought to be made:

Brad Tavares vs. Yoel Romero Palacio: Tavares climbed another rung on the middleweight ladder in posting a unanimous decision over Lorenz Larkin in the co-main event. The 29-year-old Hawaiian employed an active standup attack, as he recorded his fifth consecutive victory and quietly improved his UFC record to 7-1. Palacio, meanwhile, stormed back from a two-rounds-to-none deficit to finish Derek Brunson in violent fashion, flooring him with a left hook before stopping him with punches and elbows on the ground. The 2000 Olympic silver medalist has yet to lose at 185 pounds.

T.J. Dillashaw vs. Eddie Wineland-Yves Jabouin winner: Improving with each appearance under the tutelage of Duane Ludwig, Dillashaw dominated Mike Easton from start to finish. The Team Alpha Male standout blended striking and wrestling seamlessly, as he punished Easton throughout their 15 minute encounter. Dillashaw, 27, owns a 5-1 record -- a disputed split decision defeat to Raphael Assuncao was the only blemish -- in his last six outings and has the look of a future title contender at 135 pounds. Wineland and Jabouin will lock horns at UFC on Fox 10 on Jan. 25.

John Moraga vs. Zach Makovsky-Joshua Sampo winner: Moraga escaped his battle against Roufusport prospect Dustin Ortiz with a split decision, as he bounced back from his failed title bid against flyweight champion Demetrious Johnson. A winner in eight of his past nine bouts, the 29-year-old Arizona Combat Sports representative appears to be in line for another top 10 challenge. Makovsky and Sampo will collide at UFC 170 on Feb. 22 in Las Vegas.

Cole Miller vs. Dennis Bermudez-Jim Hettes winner: Miller was in prime form against Sam Sicilia, as he evened his record at 3-3 since returning to the featherweight division. The American Top Team veteran staggered and bloodied Sicilia with a series of straight right hands, trailed him to the canvas and submitted him with a rear-naked choke, earning “Submission of the Night” honors for the fourth time in his UFC career. Bermudez will confront the once-beaten Hettes at UFC 171 in March.

Lorenz Larkin vs. Dylan Andrews: High hopes soon faded for Larkin, as he dug himself a two-round hole against Tavares and wound up on the wrong side of a unanimous decision. The 27-year-old Millennia MMA product remains an intriguing talent at 185 pounds but will need to show more consistency if he wants to make real noise. Andrews saw his six-fight winning streak grind to a halt in December, when he suffered a shoulder injury in the second round of his UFC Fight Night 33 battle with Clint Hester.