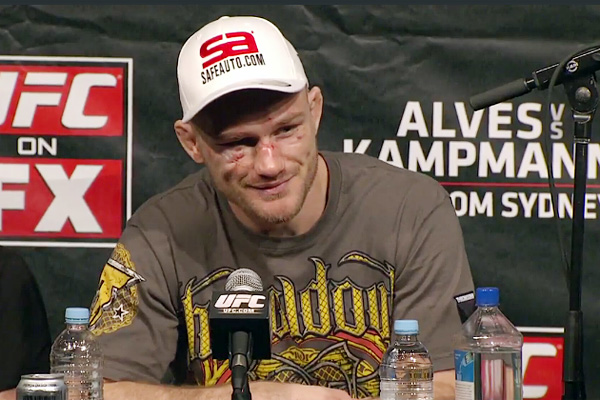 Martin Kampmann’s date with defeat appeared to be just 48 seconds away.

Outgunned for the majority of his welterweight bout with Thiago Alves, “The Hitman” capitalized on an ill-advised takedown attempt to secure a guillotine choke, forcing the Brazilian to tap at 4:12 of round three in the UFC on FX 2 main event.

Before Kampmann’s miraculous comeback, history was made at the Allphones Arena in Sydney, as the UFC debuted its long-awaited flyweight division with the semifinals of a four-man tournament. On one side of the bracket, Joseph Benavidez cruised past Yashuhiro Urushitani. The other pairing featured plenty of controversy, however, with Demetrious Johnson and Ian McCall ultimately battling to an unsatisfying draw. Fans were robbed of a potential “sudden death” round due to a scorecard tabulation error, which awarded a decision to Johnson at the fight’s conclusion.

While “Uncle Creepy” and “Mighty Mouse” will lock horns again in the coming months, the evidence of their first tooth-and-nail struggle Down Under is forever preserved in the form of raw data, as is Alves’ near-miss against Kampmann. Here is a by-the-numbers look at UFC on FX 2, with statistics provided courtesy of FightMetric.com:

21: Submissions attempted by Kampmann in his UFC career, good for No. 6 all-time in the promotion. The guillotine that forced Alves to tap at 4:12 of the final stanza was his only submission attempt of the fight.

2,342: Days since Alves’ last submission defeat. Spencer Fisher forced the Brazilian to submit to a triangle choke at 4:43 of round two at UFC Fight Night 2 in 2005.

15: Significant strike advantage for Alves, who outlanded Kampmann 32 to 23 in round two and 19 to 12 in round three. The Dane landed 12 significant strikes to Alves’ 11 in the opening frame, but “Pitbull” had a 34-20 edge in total strikes over the first five minutes.

4-2: Record for Kampmann in UFC bouts in which his opponent held an advantage in significant strikes. The Xtreme Couture product has also beaten Rick Story, Carlos Condit and Drew McFedries while being outstruck. He outlanded Jake Shields and Diego Sanchez by a combined 36 significant strikes in a pair of recent decision defeats.

8: Total strikes needed by Benavidez to finish Urushitani 11 seconds into the second round of their flyweight matchup. It was the second TKO win under the Zuffa banner for the Team Alpha Male representative. 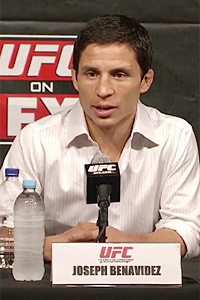 Joseph Benavidez
Benavidez advanced with a big win.
29: Consecutive professional fights for Urushitani in which he had not been stopped by strikes. Benavidez dropped the Shooto 123-pound champion with a right hook and finished him with punches on the ground to earn a stoppage in Urushitani’s 30th appearance on Friday night. The 35-year-old had only been finished once in his career, a submission loss to Yuki Shojo in 2008.

27: Difference in total strikes landed by McCall in the third round (83) and in rounds one (26) and two (30) combined. “Uncle Creepy” turned it on in the final stanza, nearly finishing the fight with punches from Johnson’s back as time expired.

0: Takedowns for Johnson, the first time “Mighty Mouse” has been shut out in that category in his UFC and WEC career. His previous low of one came in a loss to bantamweight champion Dominick Cruz in October. Meanwhile, McCall converted four of his nine takedown attempts.

307-192: Significant strike advantage for Johnson over the course of his seven bouts in the UFC and WEC. The Washington native has landed more significant strikes than each of his opponents, including losses to Brad Pickett and Cruz. He outlanded McCall 75 to 61.

2: Wins over the Miller family for Steven Siler, who earned a unanimous decision against Cole Miller in a featherweight bout. Previously The Pit Elevated Fight Team representative defeated Micah Miller, Cole’s younger brother, to gain entry into “The Ultimate Fighter 14” house in an unofficial contest.

95: Total strikes landed by Siler, who threw 235 strikes over the course of three rounds. Meanwhile, Miller connected on 77 of his 157 total strikes.

68: Total strikes by which Andrew Craig outlanded Kyle Noke in rounds two and three in his unanimous decision victory over the Australia native. UFC President Dana White later tweeted that Noke, who landed 14 more significant strikes than his opponent in the opening frame, blew out his knee in round one.

17: Finishes in 17 career victories for Daniel Pineda, who defeated WEC veteran Mackens Semerzier with a triangle armbar at 2:05 of the first round. The former Legacy Fighting Championship two-division titleholder submitted Pat Schilling with a rear-naked choke in his UFC debut.