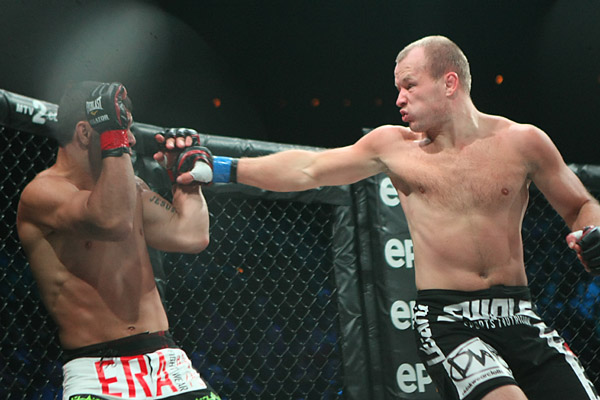 
One of only a handful of top-flight middleweights not currently under Ultimate Fighting Championship control, Alexander Shlemenko still has plenty left to prove.

“Storm” will defend his Bellator MMA middleweight crown for the second time when he locks horns with former World Extreme Cagefighting titleholder Doug Marshall in the Bellator 109 main event on Friday at the Sands Casino Event Center in Bethlehem, Pa. With Ben Askren flying the coop, the Russian striker becomes the second-longest reigning champion on the Bellator roster behind only Eduardo Dantas.

Shlemenko will enter the cage on an 11-fight winning streak. He last appeared at Bellator 98 in September, when he turned away a spirited challenge from Brett Cooper to retain his title with a unanimous decision at the Mohegan Sun Arena in Uncasville, Conn. The 29-year-old Rusfighters Sport Club representative has compiled a stellar 9-1 record since arriving in Bellator in April 2010, a decision loss to Hector Lombard the lone misstep. A dynamic standup fighter who favors unorthodox attacks, Shlemenko has delivered more than half (28) of his 48 professional victories by knockout or technical knockout.

In Marshall, he faces a challenger who shares his affinity for punches, kicks, knees and elbows. The abrasive 36-year-old Californian earned his crack at the gold by winning Bellator’s Season 8 middleweight tournament, toppling Cooper, Andreas Spang and Sultan Aliev. Marshall held the WEC light heavyweight championship from Aug. 17, 2006 until March 26, 2008, successfully defending it on two occasions before a knockout loss to Brian Stann ended his reign at WEC 33. Confident, heavy-handed and aggressive, “The Rhino” sports 13 first-round finishes on his resume. Marshall has rattled off four straight wins since being knocked out by Zelg Galesic at a Super Fight League event in Indian more than a year ago.

With the Shlemenko-Marshall middleweight title fight as the centerpiece, here are 10 facts surrounding Bellator 109:

FACT 1: American Top Team’s Will Brooks played football at Harper College in Palatine, Ill., before a knee injury ended his career. The institution discontinued the sport in January 2012.

FACT 2: Russian lightweight Alexander Sarnavskiy has finished 18 opponents inside one round, five of them in less than a minute.

FACT 5: Nathan Coy is one of three men to have held the Maximum Fighting Championship welterweight title, along with Pat Healy and Douglas Lima.

FACT 7: Spawned by Season 7 of “The Ultimate Fighter” reality series, Matt Riddle has never competed outside the UFC’s Octagon.

FACT 10: This will be the third Bellator event held in the state of Pennsylvania, joining Bellator 77 and Bellator 33.